This condition is caused by Trypanosoma brucei, a member of the protozoan group known as hemoflagellates because of their propensity to live in the blood and tissues of the human host. The disease, also called trypanosomiasis, has greatly affected the living conditions of Africans since ancient times. Today at least 50 million people are at risk, and 50,000 to 70,000 new cases occur each year. It imposes an additional hardship when it attacks domestic and wild mammals.

Trypanosomiasis affects the lymphatics and areas surrounding blood vessels. Usually a long asymptomatic period precedes onset of symptoms. Symptoms include intermittent fever, enlarged spleen, swollen lymph nodes, and joint pain. There are two variants of the disease, caused by two different subspecies of the protozoan. In both forms, the central nervous system is affected, the initial signs being personality and behavioral changes that progress to lassitude and sleep disturbances.

The disease is commonly called sleeping sickness, but in fact, uncontrollable sleepiness occurs primarily in the day and is followed by sleeplessness at night. Signs of advancing neurological deterioration are muscular tremors, shuffling gait, slurred speech, seizures, and local paralysis. Death results from coma, secondary infections, or heart damage.

Trypanosoma brucei is a flagellated protozoan, an obligate parasite that is spread by a blood-sucking insect called the tsetse fly, which serves as its intermediate host. It shares a complicated life cycle with other hemoflagellates.

The cycle begins when a tsetse fly becomes infected after feeding on an infected reservoir host, such as a wild animal (antelope,pig, lion, hyena), domestic animal (cow, goat), or human. In the fly’s gut, the trypanosome multiplies, migrates to the salivary glands, and develops into the infectious

stage. When the fly bites a new host, it releases the large, fully formed stage of the parasite into the wound. At this site, the trypanosome multiplies and produces a sore called the primary chancre. From there, the pathogen moves into the lymphatics and the blood. The trypanosome

can also cross the placenta and damage a developing fetus. Two variants of sleeping sickness are the Gambian (West African) strain, caused by the subspecies Trypanosoma brucei gambiense, and the Rhodesian (East African) strain, caused by T. b. rhodesiense . African sleeping sickness occurs only in Sub-Saharan Africa. Tsetse flies exist elsewhere, and it is not known why they do not support Trypanosoma in other regions. Cases seen in the United States are only those that were acquired by travelers or emigres from Africa. 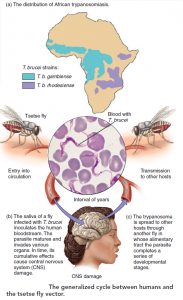 The protozoan manages to flourish in the blood even though it stimulates a strong immune response. The immune response is counteracted by an unusual adaptation of the trypanosome. As soon as the host begins manufacturing IgM antibodies to the trypanosome, surviving organisms change the structure of their surface glycoprotein antigens. This change in specificity (sometimes referred to as an antigenic shift) renders the existing IgM ineffective, so that the parasite eludes control and multiplies in the blood. The host responds by producing IgM of a new specificity, but the protozoan changes its antigens again. The host eventually becomes exhausted and overwhelmed by repeated efforts to catch up with this trypanosome masquerade.

Trypanosomes are readily demonstrated in blood smears, as well as in spinal fluid or lymph nodes.

Control of trypanosomiasis in western Africa, where humans are the main reservoir hosts, involves eliminating tsetse flies by applying insecticides, trapping flies, or destroying the shelter and breeding sites. In eastern regions, where cattle herds and large wildlife populations are reservoir hosts, control is less practical because large mammals are the hosts, and flies are less concentrated in specifi c sites. The antigenic shifting practiced by the trypanosome makes the development of a vaccine very difficult. Chemotherapy is most successful if administered prior to nervous system involvement. Two drugs are available for the early stages of the disease. Suramin works against T. b. rhodesiense, and pentamidine is used for T. b. gambiense. Brain infection must be treated with drugs that can cross the bloodbrain barrier. One of these is a highly toxic arsenic-based drug called melarsoprol. Another is called eflornithine. 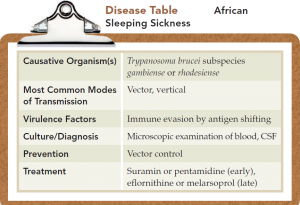