The meristems can be divided on the basis of 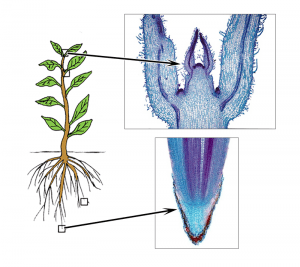 On the basis of position in the plant body

The meristems occupy different areas in the body of plants and depending upon this, they can be divided into:

(2) Xylem : It is the chief water-conducting tissue of the plants. Xylem functions as a conducting tissue for water and minerals from the roots to the top of plants, i.e., to the stems and leaves.

Types of xylem : On the basis of origin, xylem tissue can be (a) primary xylem, (b) secondary xylem.

It is formed by the vascular cambial ring.

Structure : Tracheid are the elongated cells with tapering ends. These

are the tube-like cells (one tube is one cell) whose both ends taper slowly to give an appearance of pointed ends.

Occurrence: Tracheids are found in all categories of vascular plants, i.e., Pteridophytes,

Occurrence: Xylem fibres are the components of xylem in all categories of vascular plants,

Functions: They are mechanical in function and provide support to the plant organs.

Xylem parenchyma : Cells of xylem parenchyma are living and thin-walled. Their Cell walls are made up of cellulose. They have a prominent nucleus and dense cytoplasm.

Occurrence: Xylem parenchyma is present in the xylem of all vascular plants.

Functions: The xylem parenchyma cells, as usual, store food materials in the form of reserve foods like starch or fat.

Types of phloem : Like xylem, phloem is also classified into primary and secondary phloem on the basis of origin.

Elements of phloem: Phloem is also a complex tissue-like xylem and is composed of the following four elements in angiosperms

Cortex: Below epidermis and upto endodermis several layers of parenchymous which comprise the cortex.

Endodermis: It is the innermost layer of the core which acts border the state.

special thickenings of waxy material  in the radial and tangential washed strips Water molecules are unable to penetrate this layer in the area.

The anatomy of the monocot root is similar to the dicot root in many respects. However, some differences are also found.

Cortex: Hypodermis is absent Cortex is made up of parenchymatous cell Endodermis is very distinct Made up of barrel-shaped cells having casparian strips.

Pericycle: It is also very distinct The cells of pericycle give me to lateral roots only as cambium is absent in the monocots

in Pith: Pith is large and well developed in roots of monocotyledonous plants .

It lies below the epidermis it is constituted by the sclerenchymatous cells monocot stem (collenchymatous in dicots) Due to presence of sclerenchyma tissue provides the mechanical support to the stems.