For centuries, anthrax has been known as a zoonotic disease of herbivorous livestock (sheep, cattle, and goats). It has an important place in the history of medical microbiology because Robert Koch used anthrax as a model for developing his postulates in 1877 and, later, Louis Pasteur used the disease to prove the usefulness of vaccination. 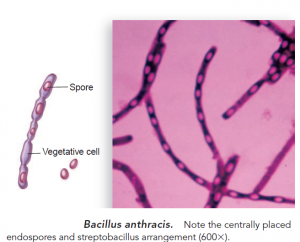 Diagnosis requires a high index of suspicion. This means that anthrax must be present as a possibility in the clinician’s mind or it is likely not to be diagnosed, because it is such a rare disease in the developed world and because, in all of its manifestations, it can mimic other infections that are not so rare. (A very astute public health clinician in Florida first suspected anthrax in the attacks of 2001 and called for the proper tests.) First-level (presumptive) diagnosis begins with culturing the bacterium on blood agar and performing a Gram stain. Further tests can be performed to provide evidence regarding presence of B. anthracis as opposed to other Bacillus species. These tests include motility (B. anthracis is non motile) and a lack of hemolysis on blood agar. Ultimately, samples should be handled by the Centers for Disease Control and Prevention, which will perform confirmatory tests, usually involving direct fluorescent antibody testing and phage lysis tests. 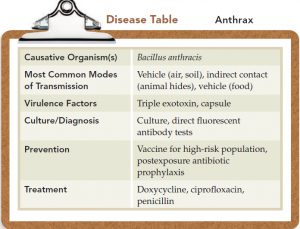