Antibodies are immunoglobulin molecules which are made up of glycoproteins. They play a major role in immunity. 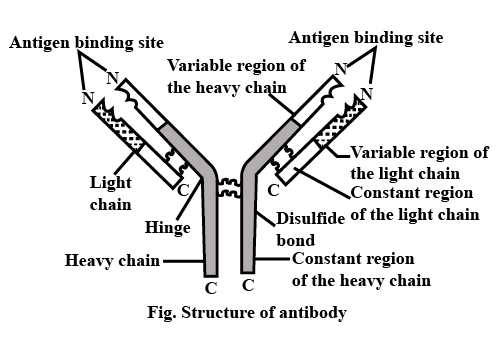 This consist of  2 polypeptide Chains.

The antibody is assembled in a Y shape structure.

It has a smaller subunit which has 22kDa molecular weight

In human, there are two classes light chains

Each Antibody molecule has either K or λ chain but not both.

It has longer subunits which have 55kDa molecular weight.

In human, there are 5 classes of heavy chains

Each heavy and light chain contain an amino-terminal variable region that consists of 100-110 amino acids and the 5 heavy chain subclasses. Variability of the amino acid sequences is precisely organised which are known as hypervariable regions or Complementarity Determining Sequences (CDRs).

It was found that there are 3 CDR regions in the variable region of each chain. The intervening sequences between the CDR regions have restricted variations. The CDR forms the Antigen binding site. The CDR are brought together when the Ab molecule falls in its native conformation.

The fragment that has no antigen-binding activity and bind to the cell surface of the receptor, also it forms crystalline during cold storage is called Fc fragment (Fragment of crystallizable)

The antibodies are capable of specific binding to the antigen that induced their synthesis. They make up about 20% of plasma proteins. There are natural and immune antibodies.

Natural antibodies are the agents of the innate immunity that react with many bacterial and viral antigens without previous immunization. They show polyspecific but low affinity. Another example of natural Abs in the presence of serum α- and β-agglutinins, which can interact with agglutinogens A and B of human red blood cells.

Immune Antibodies arise after the immunization is capable of acting against the immunogen.

The mechanisms of the antigen-neutralizing effect of Ab are the following:

– blocking of active sites of toxins, inactivation of venoms;

– opsonization of antigens with phagocytosis enhancement;