Autoradiography is a technique which is used to locate radioactive isotopes in cells, tissues, organs and whole organisms. A specimen is exposed to a solution containing molecules that have been made radioactive by the incorporation of radioactive isotopes, such as tritium (3H), carbon 14 (14C), phosphorus (32P) and sulphur (35S). The tagged molecules are often precursor molecules used by the cell in the synthesis of other needed molecules. At intervals, samples are removed from the solution; in case of smaller tissues, the samples are sectioned and mounted on glass slides or grids. The sections are then coated with a photographic emulsion and stored in the dark for periods ranging up to several months. When a radioactive atom emits a beta particle (i.e., electron) the photographic emulsion is affected in a manner

similar to the exposure of a photographic emulsion to light. Over a period of time sufficient radioactive emissions occur to affect the silver grains of the emulsion. Black spots will appear at those sites when the emulsion is developed. Such spots will mark sites in the tissues where the radioactive atoms have accumulated. These sites can be identified by examining the stained tissue sections under the light microscope.

Pulse-labelling technique: This technique is used for those cases where biological molecules undergo considerable modifications after their synthesis (e.g., ribosomal RNA). Here, actively growing cells are exposed to a radioactive precursor for a short period. The labelled precursor is then removed and replaced by ‘cold’ (unlabelled) precursor molecules.

The unlabelled precursors are incorporated into the newly synthesized molecules and have the effect of ‘chasing’ the previously synthesized molecules containing the radioactive precursor through any maturation process. If the molecular species under investigation is sampled shortly after the start of the experiment, only the primary synthetic product will contain radioactivity. After longer time intervals, the original radioactive molecules will have been replaced with non-radioactive molecules. In this way the flow of radioactivity through a maturation process can be followed, together with any movement of molecular species within the cell. 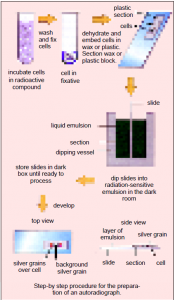