Chemolithotrophy is found in a limited number of microorganisms. Chemolithotrophs obtain their energy by the oxidation of inorganic substrates and their carbon from CO2. However, these reactions yield less energy than oxidation of glucose to CO2, so large quantities of substrates have to be metabolized to generate enough energy for sufficient ATP and NADH generation. An example of this is in the process whereby ammonia is oxidized to nitrate (nitrification) and ATP can be generated from this reaction. However, electrons cannot be donated directly for NADH production from ammonia or nitrate because they have a more positive redox potential than NAD+. Instead a process termed ‘reversed electron flow’ allows electrons from the oxidation of nitrite to be used to generate small but sufficient amounts of NADH for growth. A similar process is used by sulfur-oxidizing bacteria, where the oxidation of sulfite (or thiosulfate) to sulfate yields electron reducing power for the production of NADH and ATP. 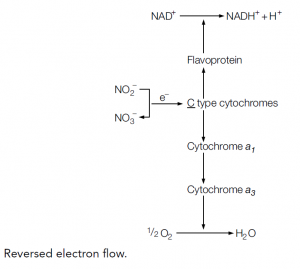 A large number of microorganisms have the ability to use sunlight to generate ATP by photophosphorylation. This process may not generate oxygen, a reaction termed anoxygenic, as found in the green and purple Bacteria, or it may generate oxygen, termed oxygenic, by the photolysis of water, as found in the blue green Bacteria and algae. The reactions are complex but can be divided into two sets of reactions, the light reactions where light energy is converted into chemical energy (ATP) and the dark reactions where ATP is used to synthesize glucose.

Photosynthetic Bacteria contain bacteriochlorophylls a and b, with absorption maxima of 775 and 790 nm, respectively. These pigments are contained within sac-like extensions of the plasma membrane called chlorosomes in green sulfur and nonsulfur bacteria and intracytoplasmic vesicles in purple Bacteria. Bacterial photosynthesis is an anoxygenic (nonoxygen-producing) photosynthesis that relies on photosystem I only, and is termed a cyclic phosphorylation. There is no net change in the numbers of electrons in the system. ATP synthesis occurs during the generation of a protein motive force during photosynthesis, which allows ATP synthase to synthesize ATP. The electrons expelled from the reaction center return to the bacteriochlorophyll via the electron transport chain. The photosynthetic apparatus consists of four membrane-bound pigment–protein complexes, plus an ATP synthase. For NADPH synthesis, Bacteria must use electron donors like hydrogen, H2S, sulfur, and organic compounds with a more negative reduction potential than water. In this case direct transfer can occur via ferredoxin. 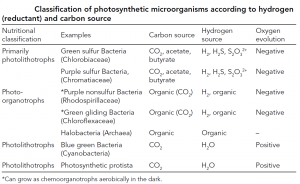 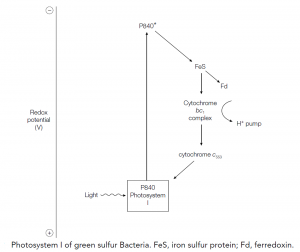 The purple sulfur Bacteria cannot synthesize NADPH directly by photosynthetic electron transport. This is because their acceptor molecules are more positive than the NADP+/ NADPH couple (-0.32 volts). In this case electrons enter the cytochromes from the electron donors, and ATP from the light reactions is used to reduce NADP+ to NADPH, by energy-dependent reverse electron flow. 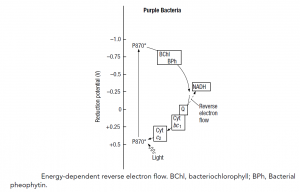 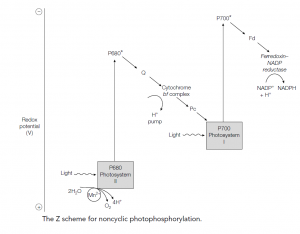 The light-independent reactions of photosynthesis use the NADPH and ATP generated from the light reactions to synthesize carbohydrates from CO2 and water. This is called the Calvin cycle. A key enzyme in this cycle is RuBisCo (ribulose bisphosphate carboxylase), a large, multi-component enzyme. This enzyme incorporates CO2 into ribulose 1,5-bisphosphate to form first a six-carbon compound, which then splits to form two three-carbon molecules (3-phosphoglycerate). Subsequent reactions regenerate ribulose 1,5-bisphosphate from one of the 3-phosphoglycerate molecules, to continue the cycle. The other molecule of 3- phosphoglycerate is transported to the cytosol and used in respiration and to produce storage sugars. 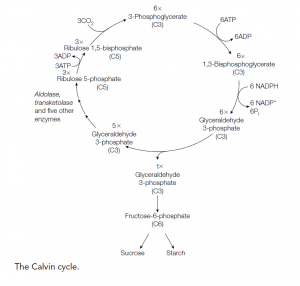 Some a-proteobacteria (notably species of Rhodobacter grown in the dark and Paracoccus) do not have the metabolic machinery to utilize some carbon compounds directly for anabolic reactions. When growing as methylotrophs the organisms cannot use C1 intermediates as a source of carbon. C1 compounds are instead oxidized completely to carbon dioxide and water, and then intracellular carbon dioxide is used directly in the Calvin cycle as a means of fixing carbon. Organisms with this ability could be called autotrophic heterotrophs. Some chemolithotrophs fall into this category too as nitrification and sulfur oxidation can be regarded as waste products of other bacteria. If both hydrogen and oxygen are present, the chemolithotroph Cupriavidus necator (formerly Ralstonia eutropha) uses a membrane-bound hydrogenase to chemiosmotically generate ATP. A separate cytosolic hydrogenase is used to generate NADH so that both NADH and ATP can be used in a normal Calvin cycle. This aerobic oxidation of hydrogen should not be confused with the anaerobic processes used by the sulfate-reducing Bacteria The problem of synthesizing carbon-containing compounds in environments rich in CO2 but poor in organic compounds has also been overcome in a different way by Chloroflexus and some Archaea. These organisms use carboxylases to convert acetyl CoA or propionyl CoA to malyl CoA and glyoxylate. The glyoxylate can then be used for anabolism, while acetyl CoA is regenerated to complete the ‘hydroxypropionate cycle’. 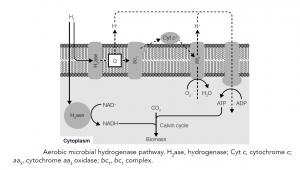 The concept of using what we regard as central catabolic pathways to anabolic reactions is taken to a logical extreme in the reverse citric acid cycle. The citric acid (TCA) cycle normally evolves CO2 and produces reducing equivalents. However, by using very reduced compounds such as sulfide, thiosulfate or hydrogen as electron donors, carbon can be fixed by species of Chlorobium using CO2 and water and the TCA cycle in reverse. This process requires an additional 2 ATP to yield acetyl CoA so that this molecule can act as an anabolic intermediate. 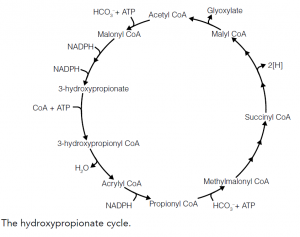 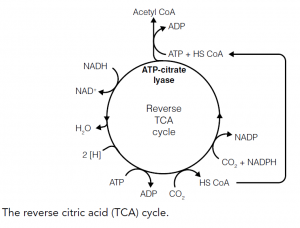