In natural conditions many bacteria produce abundant quantity of extracellular polymers. With some exceptions (e.g., B. anthracis expresses poly-D-glutamic acid capsule), the extracellular sheet is made of polysaccharides.

In case of synthesis of huge polymeric external layer that enwraps the cell, it is named as bacterial capsule. A capsule is an optional structure of the bacteria that is usually formed in worsened environmental conditions.

But in part of bacteria the external polysaccharide sheet doesn’t show firm attachment to the cell wall, being relatively thin and loose. In these situations it is characterized as a “slime layer”.

The capsule is a potent virulence factor of bacteria as capsulated microbes demonstrate high resistance against phagocytosis. Similarly, they are poorly available for antibodies.

The “slime layer” takes part in bacterial adhesion, including microbial binding to living cells in course of infection.

Owing to its polysaccharide nature, bacterial capsule is poorly stained with aniline dyes. In standard cases it is negatively stained by Gin’s method that creates Indian ink background for capsulated microbial cells.

The flagella provide the motility for the microbes. They are optional bacterial organellas responsible for cell locomotion.

According to the mode of flagellum attachment, the motile bacteria are divided into four basic groups:

– amphitrichous bacteria that possess two polar flagella or carrying the tufts of flagella at both poles (Spirillum volutans);

– lophotrichous bacteria with a tuft of flagella located at one pole (Helicobacter pylori);

The flagellum is composed of flagellin – a contractile protein resembling cellular actin.

Antigenic activity of motile bacteria related with flagella is generally termed as H-antigen.

The flagellum has several parts in its structure – basal bodies, attached to cytoplasmic membrane and cell wall, flagellar hook and terminal filament that endows the cell with spinning movement.

Direct flagella presence in bacteria is revealed by electron microscopy or by means of a special method of bright field microscopy that uses Loeffller’s stain. The latter technique causes the enlargement of thin flagellar filaments; and they become visible under light microscopy stained in pink color.

Also many species of gram-negative bacteria, like Enterobacteriaceae members (shigellae or salmonellas), were found to have particular flagellar-like structure termed as injectisome, or needle complex.

Bacterial surface is covered by short hairlike appendages termed as pili or fimbriae. Usually they are about 0.5-1.0 μm in length and less than 10 nm in width. Every microbial cell may carry from 100 to 400 units of pili.

Pili are composed of closely related family of proteins known as pilins. Two basic kinds of pili are present in bacterial cells. Among them are ordinary pili that provide microbial adhesion to the cells and tissues, and conjugative (or sex-pili), participating in the process of bacterial conjugation.

Ordinary pili also foster bacterial nutrition as they highly increase the efficient area of absorbtion of nutrients for microbial cells.

Conjugative pili produce the hollow channel (or conjugative tube) that ensures the direct contact between donor and recipient cells. This allows the transfer of genes to the recipient cell as the result of conjugation.

In addition, bacterial pili can play a role of cellular receptors (e.g., for bacteriophages) and demonstrate marked antigenic properties. 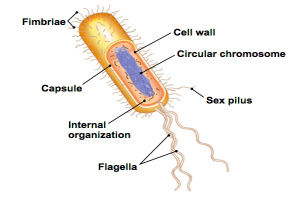