Most Bacteria and Archaea cells accumulate biomass until a critical volume is reached when they divide into two identical daughter cells. This division occurs in a single plane of symmetry. To some extent division dictates the simplicity in cell shape and the prevalence of cell numbers of 2n when cells appear in chains or clusters. The process of cell division can be divided into four steps: growth and replication; FtsK ring construction and chromosome separation; FtsK ring constriction and septation; and lastly cell separation. 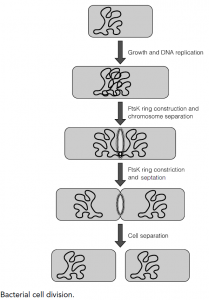 The process is poorly understood, involving many proteins and an extremely efficient control system. A central role is played by FtsK, a structural and functional analog of the eukaryotic tubulins. FtsK was named after the filamentous temperature-sensitive mutants that were first recognized in E. coli. At sometemperatures mutants were unable to septate and became long, multinucleate filaments, a phenomenon seen in some wild-type lactobacilli and in Streptomyces. During the process of chromosomal replication, FtsK monomers begin to move to a point midway between the two ends of the cell. It is unclear how this happens, but inhibitors (the proteins MinC, D, and E) have been identified at the poles preventing the initiation of unwanted separation.

The FtsK proteins form a ring and it is certain that at this point other proteins are recruited to the locality to deal with the site-specific recombination events that must take place to allow the separation of the two replicated chromosomes. The formation of a septum begins with constriction of the FtsK ring across the width of the cell and the septum forms completely, so that the daughter cell becomes separate. There are undoubtedly many other mechanisms governing the act of cell division, since the entire contents of the cell, including ribosomes, proteins, lipids, cell membrane, cell wall, and any extra-chromosomal material must also be divided between the two cells, as both daughter cells are immediately and fully functional. It is remarkable that this process is repeated every 40 minutes by E. coli. The universality of FtsK-like proteins across both the Bacteria and Archaea suggests that this is an evolutionarily conserved, fundamental mechanism for single-celled life.

The formation of endospores is a survival mechanism practiced by Gram-positive Bacterial genera, the best studied of which is Bacillus subtilis. It can be regarded as a specialized case of cell division, with some of the mechanisms being similar and performed by protein orthologs (for example, the sporulation protein SpoIIIE is very similar to FtsK). The spore and vegetative cell have very different properties.

The process of spore formation can be divided into seven stages:

More than 50 genes and their products are specifically involved in sporulation, all coordinated both spatially and temporally over about 6–7 hours. The reverse of the process, first activation and then germination, takes only minutes. 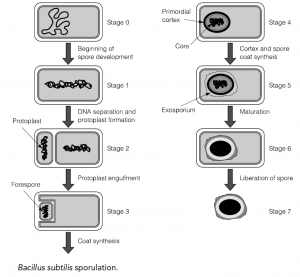