▶Structure of the cell wall

The cell membrane of the prokaryotic cell alone is not sufficient to provide the rigidity that a free-living organism requires. In Gram-positive bacteria the shape and integrity of the cell is maintained by a thick single layer of peptidoglycan. However, the Gram-negative cell wall has evolved a greater level of complexity, with a second membrane outside the cell membrane to form a periplasm, in which a chemically similar but thinner peptidoglycan layer appears. The outer membrane is composed mainly of lipopolysaccharide (LPS). Both Gram-negative and Gram-positive cell walls have many proteins embedded in them, penetrating through or attached to their surfaces. Some of these serve in the detection of environmental signals. 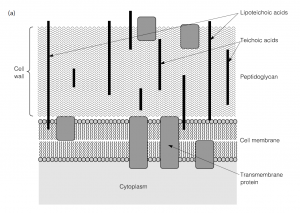 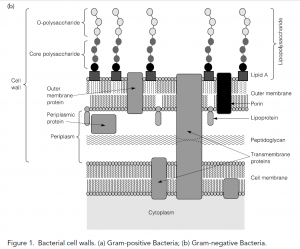 Growth substrates, metabolites, and secreted proteins are also allowed to pass through the thick outer layer by means of specific protein ports. The main differences between Gram-positive and Gram-negative Bacterial cell walls are shown in Table 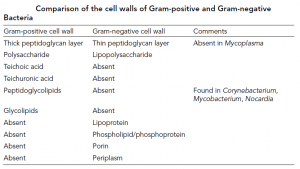 Peptidoglycan or murein is made up of two sugar derivatives, N–acetylglucosamine (NAG) and N–acetylmuramic acid (NAM) with a β(1–4 )linkage. Chains of alternating NAM and NAG are cross-linked by amino acids such as l-alanine and d-glutamic acid as well as diaminopimelic acid (DAP). The way in which the cross links are formed differs in Gram negative and Gram-positive Bacteria. In most Gram-negative Bacteria there is a direct interbridge between polypeptide side-chains emerging from adjacent NAG/NAM polymers, while in most Gram-positive Bacteria the interbridge that links side-chains is a glycine pentapeptide. The structure of peptidoglycan is highly conserved among the Bacteria as a whole, the only variations being slight changes in the inter bridge. Peptidoglycan is resistant to many chemical challenges, but is easily broken down by lysozyme, which breaks the bonds between NAG and NAM. Without the constraining polymer, the osmotic potential is too much for the cell membrane to contain and the cell bursts. Lysozyme is present in many human bodily secretions as the first form of defense against Bacterial invasion. Those cells without peptidoglycan (particularly Mycoplasma) avoid this lysis.

The Gram-positive Bacteria have substances called teichoic and teichuronic acids interspersed with the peptidoglycan polymer. ‘Teichoic’ is a broad term covering polymers containing glycerophosphate or ribitol phosphate and the primary function of these compounds appears to be to bind essential divalent cations such as Mg2+, maintaining the local ionic environment of the cell. The gross effect of the presence of teichoic acids in the membrane is to give the cell a slightly negative charge.

It is extremely difficult to generalize on Archaeal cell wall structure, as the diversity is far higher than that of the Bacteria. Although our knowledge of the Archaeal cell wall is not as highly developed as that of Bacteria, we do know that some Archaea have a compound very similar to the murein, named pseudopeptidoglycan. This has a backbone containing NAG, but alternating NAM is replaced with N-acetyltalosaminuronic acid and is β(1–3 ) linked instead of β(1–4). However, many Archaea maintain rigidity with the use of a mixture of polysaccharide, protein, and glycoprotein. 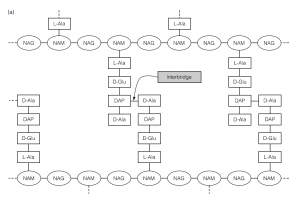 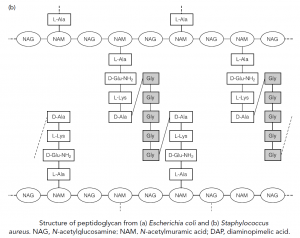 The primary method of distinction between the two main groups of Bacteria remains the Gram stain. Gram-positive and Gram-negative is used in identification, classification, and taxonomy immediately after morphological study. This important method is based on the ability of the cell wall to retain or lose certain chemicals. The staining procedure was devised in 1884 by Christian Gram. It has since proved to have first a biochemical and then a phylogenetic significance in the Bacteria. The cells are first fixed to a glass microscope slide (normally by heating gently over a Bunsen flame) and crystal violet is used to stain the preparation. In order to complex the crystal violet with the cell wall, a solution of iodine is then added. If the slide is now washed with alcohol, the bound crystal violet stain will be washed out of the thin-walled Gram-negative cells, but cannot pass through the thicker Gram-positive wall.

A counterstain of carbol fuchsin then stains all Gram-negative cells a pale pink, while the Gram positive cells retain their deep violet color. These color differences can be seen clearly under a light microscope. Most Bacteria react true to their phylogeny with this stain, with only a few species such as Paracoccus behaving abnormally. Some attempt has been made to classify the Archaea with the Gram stain, but unfortunately in this kingdom the variability in staining begins at the subgenus level.

In contrast to the Gram-positive Bacteria, the model Bacterium E. coli does not present a coat of peptidoglycan to the outside world. Instead the murein is suspended in the periplasmic space and there is a second outer membrane of LPS. The Gram-negative outer membrane has some features in common with the cytoplasmic membrane in that it is a lipid bilayer and is considered to be a fluid mosaic. However, rather than being composed of phospholipid alone, there are many lipids with polysaccharide attached. This alters the chemical and physical properties of the membrane, in that it is much more porous to much larger molecules. This porosity is enhanced by the presence of many porin and transport proteins.

The outer membrane structure of Gram-negative Bacteria has been driven by the antigenic properties of LPS, so the details purporting to represent Gram-negatives are in reality more relevant to pathogenic enteric Bacteria such as E. coli, Salmonella, and so on. The presence of LPS can provoke a strong immune response in mammals, so in genera including Escherichia, Salmonella, Shigella, Pseudomonas, Neisseria, and Haemophilus, the term LPS has become interchangeable with ‘endotoxin.’ The chemistry of this LPS outer membrane is complex and variable between species. In Salmonella the lipid part of the molecule (lipid A) is phosphorylated glucosamine linked to long carbon chains which, in contrast to membrane lipids, may be branched. Lipid A of Gram-negative Bacteria is covalently linked to the core polysaccharide but even if separated from the rest of the molecule it is frequently toxic to mammals, even if the bacterium of origin is non pathogenic. Lipid A serves to anchor the LPS to the rest of the outer membrane.