The most common means of locomotion in prokaryotes is via the rotation of flagella.These act as propellers, allowing the cell to swim through liquid media. A single cell may have many flagella spread all over the surface of the cell (peritrichous flagella), the flagella may be polar, found at one (monotrichous if single) or both ends (amphitrichous if only two in total). Lipotrichous flagella grow in tufts from one position on the cell surface.

Each flagellum is not straight but is helix shaped, with the length, wavelength, and amplitude of the helix varying from species to species. Although the presence or absence, the properties, and the position of the flagella can be used as taxonomic characters, all bacterial flagella are composed of the same protein: flagellin. However, much like cell wall composition, the situation in Archaea is very different, in that there are many different proteins in this kingdom that perform analogous functions.

▶The structure of the Bacterial flagellum

The flagellin filament is only visible using the light microscope if it is complexed with another compound to increase its thickness. The filament is only 20 nm in diameter, but can be up to 20 mm in length. In Gram-negative Bacteria, the motor proteins (providing rotation) are buried in the cytoplasmic membrane, with a drive shaft passing through the peptidoglycan in the periplasm via the P ring and the outer membrane via the L ring.

The flagellar motor is an adapted proton uniport. The cell must have an electron potential gradient across the membrane and an ingress of protons through the motor causes the MS ring, and thus the flagellin, to rotate. This is an example of a simple bioenergetic process. 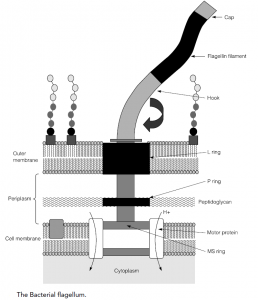 Bacterial movement in solution can be divided into two main actions: the run is where the bacterium moves in a straight line towards an attractant. If the attractant moves or disappears, then the cell tumbles (moves around randomly on the spot) before beginning another run. Random tumbling is the only form of steering that bacteria have at their disposal.

Depending on how the filaments are attached to the cell, flagella are used in three main ways to achieve locomotion:

Other types of movement All prokaryotes appear to move under the light microscope, as they are sufficiently small to be shaken by random bombardment of local molecules (Brownian motion). In addition, convection currents generated by the light source will appear to make nonmotile bacteria move slightly. Although flagella are widespread throughout the Bacterial and Archaeal kingdoms, other forms of locomotion have evolved. Many Bacteria have a gliding motility, which allows flagella-free bacteria to move rapidly across surfaces. In the Cyanobacteria, this gliding is achieved by the secretion of slime, although the exact way in which this allows the Bacterium to move is poorly understood. Flavobacterium johnsoniae also glides, but appears to achieve this by using cell wall proteins to grab onto the surface and haul the Bacterium along a few nanometers at a time.

The spirochetes exploit their helical morphology to generate a unique form of movement, dependent on internalized flagella. These corkscrew-like cells have axial filaments or endoflagella located between the cell membrane and the cell wall. The rotation of these structures causes the whole cell to wriggle and rotate, and motion results.