A number of gram-positive bacteria, such as those of the genera Clostridium and Bacillus can form a special resistant dormant structure called an endospore or, simply, spores. Endospore develops when essential nutrients are depleted. 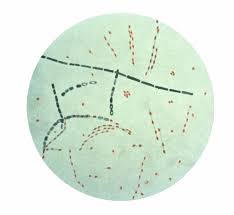 Sporulation in bacteria, therefore, is not a method of reproduction but of preservation.
Sporulation: Spore formation, sporogenesis or sporulation normally commences when growth ceases due to lack of nutrients, depletion of the nitrogen or carbon source (or both) being the most significant factor. New antigens appear on sporulation that is not found in the vegetative cell.
Stages: It is a complex process and may be divided into several stages
• Spore septum: In the first observable stage of sporulation, a newly replicated bacterial chromosome
and a small portion of cytoplasm are isolated by an ingrowth of the plasma membrane called a spore
septum

• Forespore: The spore septum becomes a double-layered membrane that surrounds the chromosome and cytoplasm. Structure, entirely enclosed within the original cell, is called a forespore.

• Spore coat: The forespore is subsequently completely encircled by dividing septum as a double-layered membrane. The two spore membranes now engage in the active synthesis of various layers of the
spore. The inner layer becomes the inner membrane. Between the two layers is laid spore cortex and the outer layer is transformed into a spore coat which consists of several layers. In some species from outer layer also develops exosporium which bears ridges and folds

• Free endospore: Finally exosporium disintegrates and the endospore is freed.

Properties of Endospores
1. Core: The fully developed spore has the core which is the spore protoplast containing the normal cell
structures but is metabolically inactive.
2. Spore wall: The innermost layer surrounding the inner spore membrane is called the spore wall. It
contains normal peptidoglycan and becomes the cell wall of the germinating vegetative cell.
3. Cortex: The cortex is the thickest layer of the spore envelope. Cortex peptidoglycan is extremely sensitive to lysozyme, and its autolysins play a role in spore germination.
4. Spore coat: Cortex, in turn, is enclosed by fairly thick spore coat.
5. Exosporium: Spores of some species have an additional, apparently rather loose covering known as
the exosporium, which may have distinctive ridges and grooves.

Germination
Germination is the process of conversion of a spore into vegetative cells under suitable conditions. It occurs in three stages: activation, initiation and outgrowth. Once activated, a spore will initiate germination if the environmental conditions are favourable. The spore loses its refractivity and swells. The spore wall is shed and the germ cell appears by rupturing the spore coat. The germ cell elongates to form the vegetative bacterium.

Shape and Position of Spores
The shape and position of the spore and its size relative to the parent cell are species characteristics. Spores may be central (equatorial), subterminal (close to one end), or terminal. The appearance may be spherical, ovoid or elongated, and is narrower than the cell, or broader and bulging it. The diameter of spore may be the same or less than the width of bacteria (Bacillus) or maybe wider than the bacillary body producing distension or bulge in the cell (Clostridium).

Resistance
Bacterial spores constitute some of the most resistant forms of life. They may remain viable for centuries. Though some spores may resist boiling for prolonged periods, spores of all medically important species are destroyed by autoclaving at 120°C for 15 minutes. Methods of sterilization and disinfection should ensure that spores also are destroyed. Sporulation helps bacteria survive for long periods under unfavourable environments. Endospore heat resistance probably is due to several
factors: calcium-dipicolinate and acid-soluble protein stabilization of DNA, protoplast dehydration, the spore coat, DNA repair, the greater stability of the cell proteins in bacteria adapted to growth at high temperatures and others

Demonstration
Endospores can be examined with both light and electron microscope. In unstained preparations, the spore is recognized within the parent cell by its greater retractability.
i. Gram staining: Spores appear as an unstained refractile body within the cell. When mature, the
spore resists colouration by simple stains, appearing as a clear space within the stained cell protoplasm.

Uses of Spores
1. Importance in food, industrial, and medical microbiology: Endospores are of great practical importance in food, industrial, and medical microbiology because of their resistance and the fact that
several species of endospore-forming bacteria are dangerous pathogens. Endospore often survives
to boil for an hour or more. Therefore, autoclaves must be used to sterilize many materials.
2. Sterilization control: For proper sterilization, spores of certain species of bacteria are employed
as an indicator, e.g. Bacillus stearothermophilus which is destroyed at a temperature of 121°C for 10 to 20minutes (same temperature and time as used in autoclaving). Prior to its use, these spores may be
kept in the autoclave. Proper sterilization is indicated by the absence of the spores after autoclaving.
3. Research: Spore formation is well suited for research on the construction of complex biological
structures.