Bacteriophages are viruses, which are specific parasites of bacteria.

It is generally acknowledged that bacteriophage activity was described first by F. d’Herelle in 1917. He discovered the specific lysis of bacterial culture affected by non-cellular filtrate of dysentheria patients feces. However, the similar phenomenon was observed previously by N. Gamaleya in 1892 and F. Twort in 1915.

Bacteriophages are ubiquitous in nature. They accompany bacteria in any place of their habitation: animal or human body, plants, water, soil, drainage waters, etc. For instance, phages are essential component of bacterioplankton, the bacteria found in the ocean. In this environment up to 2.5 x 108 phages/ml have been found.

In patients, suffering from various bacterial diseases, the phages are excreted by feces, urine, sputum, and saliva in the parallel with bacterial discharge. They are important epidemiological markers of the bacterial infection 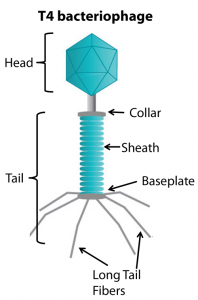