The metabolic products of yeast metabolism are exploited by humans for bread making and alcohol brewing. Yeast metabolism of flour starch by respiration generates CO2, which is trapped within the gluten-rich dough and forces bread to rise. In the brewing of alcohol, yeasts are forced into fermentative metabolism in the sugar-rich, low oxygen environments of beer wort or crushed grape juice. The fermentative metabolism is inefficient, and only partially metabolizes the available substrates, yielding CO2 and ethanol. Both processes considerably enhance the value of the original substrate while contributing little to its nutritional status.

Fungi can enter into close associations with other microbes and with higher plants and animals. These beneficial associations are termed symbioses, and in most cases the symbiotic fungus gains carbohydrates from its associate, while the associating organism gains nutrients and possibly protection from predation and herbivory or plant pathogens. Fungal symbioses are common on plant roots, and the symbiotic roots are termed mycorrhizae. Their presence enhances nutrient uptake by plant roots and plant performance. The fungal association can be predominantly external to the root tissue. These associations are called ectomycorrhizae and can be seen on beech and pine trees, for example, and the fungal partners are members of the Dikarya. Other associations are predominantly within the plant root, and are termed endomycorrhizae. These associations are seen on the roots of herbaceous species like grasses, but are also found in the roots of tropical species of tree and shrub. These partnerships are with fungi in the Glomeromycota.

Other associations between fungi and plants can occur within leaves or stems, and these are called endophytic fungi. They live almost all their life cycle within the host, grow very slowly, and do not cause any signs of infection. They appear to protect their host from herbivory and fungal infection by the production of metabolites. However, these products can have dramatic effects on herbivorous animals, causing symptoms of fungal toxicosis. Some fungi can form very intimate associations with algal species. These associations are termed lichens, and they have a form quite distinct from that of either component species, with crustose, foliose or fruticose thalli. They are slow-growing and are adapted to occupy extreme or marginal environments, like bare rock faces, walls, and house roofs. As they are under quite extreme stress they are highly sensitive to pollution, for instance, from acid rain or heavy metals, and their presence or absence in an environment has become a useful indicator of urban and industrial pollution. Fungi can also associate with insect species in symbioses of varying intimacy. Some species of ants culture-specific fungi on cut plant remains within their nests and then browse on the fungal mycelium that develops. Termites have symbiotic fungi within their guts, which – in association with a consortium of other microbes, including Protista and bacteria help the termite digest its woody gut contents. 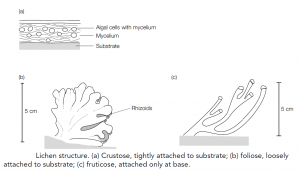 The degradative processes that fungi perform with their extracellular enzymes are essential to the terrestrial biosphere. They are the main agents of decay of cellulosic wastes produced by plants, which in the tropical rain forest can amount to 12 000 kg hectare-1 year-1. They decompose this material into CO2, H2O, and fungal biomass, which in turn is decomposed by other microbes, returning mineral nutrients like phosphorus, nitrogen, and potassium to the biosphere. This process is termed mineralization.

The natural attributes of fungi as disease-causing organisms can be exploited by humans to control weed plant populations and insect pests. They are even capable of parasitizing plant disease-causing fungi. This process is termed biological control and can be an alternative to the application of chemical pesticides. Applications of fungal propagules to targeted problem populations can cause epidemic disease or overwhelm and monopolize a niche.

The degradative processes that fungal enzymes catalyze on their natural substrates can be used on other, man-made substrates to provide biological clean-up. Hydrocarbons like oils can be degraded by fungi and other microbes to CO2 and H2O by aerobic respiration. These activities are termed bioremediation, and contaminated areas of land can be actively bioremediated by the addition of fungal propagules.

Pesticides, explosives, and other recalcitrant molecules can be changed by co-metabolic activities of fungi, where enzymes normally used for one metabolic process within the fungus coincidentally catalyze another reaction. The products of co-metabolic reactions are not utilized any further by the fungus, but can sometimes be used by other microbes in the ecosystem. Reactions like these can lead to reduced toxicity of some contaminants, but in other cases can lead to activation of the pollutant, leading to an increase in the toxicity of the compound.

Fungi are able to produce many different types of metabolite that are of commercial importance. These include antibiotics (e.g. penicillin and cephalosporin) and immunosuppressants (cyclosporins) important in medicine, enzymes that are used in the food industry (e.g. a-amylase, rennin), other enzymes (e.g. cellulases, catalase), acids (e.g. lactic, citric), and several other products.