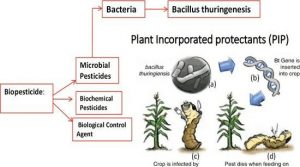 25 million cases of acute occupational pesticide poisoning in developing countries are being reported each year.

(1) Microbial pesticides consists of a natural occurring and genetically controlled microorganism as the active ingredients.

(2) Plant incorporated protectant is pesticide substance that plant produce from genetic material that has been added to plant.