Botulism is an intoxication (that is, caused by an exotoxin) associated with eating poorly preserved foods, although it can also occur as a true infection. Until recent times, it was relatively common and frequently fatal, but modern techniques of food preservation and medical treatment have reduced both its incidence and its fatality rate. However, botulism is a common cause of death in livestock that have grazed on contaminated food and in aquatic birds that have eaten decayed vegetation. In the United States, there are between 10 and 30 outbreaks of human botulism a year.

There are three major forms of botulism, distinguished by their means of transmission and the population they affect. These are food-borne botulism (in children and adults), infant botulism , and wound botulism. Food-borne botulism in children and adults is an intoxication resulting from the ingestion of preformed toxin; the other two types of botulism are infections that are followed by the entrance of an exotoxin called botulinum toxin into the bloodstream (that is, toxemia).

The symptoms are largely the same in all three forms, however. From the circulatory system, the toxin travels to its principal site of action, the neuro muscular junctions of skeletal muscles. The effect of botulinum is to prevent the release of the neurotransmitter substance, acetylcholine, that initiates the signal for muscle contraction. The usual time before onset of symptoms is 12 to 72 hours, depending on the size of the dose.

Neuromuscular symptoms first affect the muscles of the head and include double vision, difficulty in swallowing, and dizziness, but there is no sensory or mental lapse. Although nausea and vomiting can occur at an early stage, they are not common. Later symptoms are descending muscular paralysis and respiratory compromise. In the past, death resulted from respiratory arrest, but mechanical respirators have reduced the fatality rate to about 10%. 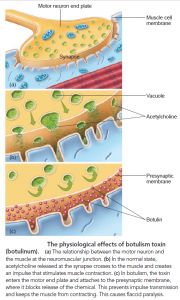 Clostridium botulinum, like Clostridium tetani, is a spore forming anaerobe that does its damage through the release of an exotoxin. C. botulinum commonly inhabits soil and water and occasionally the intestinal tract of animals. It is distributed worldwide but occurs most often in the Northern Hemisphere. The species has eight distinctly different types (designated A, B, Cα, Cβ, D, E, F, and G) that vary in distribution among animals, regions of the world, and types of exotoxin. Human disease is usually associated with types A, B, E, and F, and animal disease with types A, B, C, D, and E.

Both C. tetani and C. botulinum produce neurotoxins; but tetanospasmin, the toxin made by C. tetani, results in spastic paralysis (uncontrolled muscle contraction). In contrast, botulinum, the C. botulinum neurotoxin, results in flaccid paralysis, a loss of ability to contract the muscles.

As just described, the symptoms are caused entirely by the exotoxin botulinum.

▶ Transmission and Epidemiology of Food-Borne Botulism in Children and Adults

In the United States, the disease is often associated with low acid vegetables (green beans, corn); fruits; and occasionally meats, fish, and dairy products. Many botulism outbreaks occur in home-processed foods, including canned vegetables, smoked meats, and cheese spreads. The demand for prepackaged convenience foods, such as vacuum-packed cooked vegetables and meats, has created a new source of risk, but most commercially canned foods are held to very high standards of preservation and are only rarely a source of botulism.

Several factors in food processing can lead to botulism. Spores are present on the vegetables or meat at the time of gathering and are difficult to remove completely. When contaminated food is put in jars and steamed in a pressure cooker that does not reach reliable pressure and temperature, some spores survive (botulinum spores are highly heat-resistant).

At the same time, the pressure is sufficient to evacuate the air and create anaerobic conditions. Storage of the jars at room temperature favors spore germination and vegetative growth, and one of the products of the cell’s metabolism is botulinum, the most potent microbial toxin known. Bacterial growth may not be evident in the appearance of the jar or can or in the food’s taste or texture, and only minute amounts of toxin may be present. Botulism is never transmitted person-to-person.

▶ Transmission and Epidemiology of Infant Botulism

Infant botulism was first described in the late 1970s in children between the ages of 2 weeks and 6 months who had ingested spores. It is currently the most common type of botulism in the United States, with approximately 75 cases reported annually. The exact food source is not always known,

although raw honey has been implicated in some cases, and the spores are common in dust and soil. Apparently, the immature state of the neonatal intestine and microbial biota allows the spores to gain a foothold, germinate, and give off neurotoxin. As in adults, babies exhibit flaccid paralysis, usually manifested as a weak sucking response, generalized loss of tone (the “floppy baby syndrome”), and respiratory complications. Although adults can also ingest botulinum spores in contaminated vegetables and other foods, the adult intestinal tract normally inhibits this sort of infection.

▶ Transmission and Epidemiology of Wound Botulism

Perhaps three or four cases of wound botulism occur each year in the United States. In this form of the disease, spores enter a wound or puncture, much as in tetanus, but the symptoms are similar to those of food-borne botulism. Increased cases of this form of botulism are being reported in intravenous drug users as a result of needle puncture.

Diagnostic standards are slightly different for the three different presentations of botulism. In food-borne botulism, some laboratories attempt to identify the toxin in the offending food. Alternatively, if multiple patients present with the same symptoms after ingesting the same food, a presumptive diagnosis can be made. The cultivation of C. botulinum in feces is considered confirmation of the diagnosis since the carrier rate is very low.

performed by experienced personnel. A suspected case of botulism should trigger a phone call to the state health department or the CDC before proceeding with diagnosis or treatment.

The CDC maintains a supply of type A, B, and E trivalent horse antitoxin, which, when administered early, can prevent the worst outcomes of the disease. Patients are also managed with respiratory and cardiac support systems. In all cases, hospitalization is required and recovery takes weeks. There is an overall 5% mortality rate. 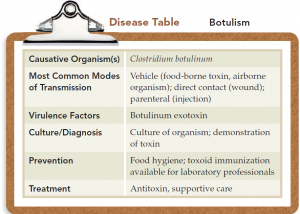