Bronchitis is quite a known chronic disease. Here are some interesting & basic facts about this ailment.

1. This disease was quite common even in those days yet the developments in the medicinal field have seen now seen many alternatives to treat the said condition.

2. pulmonary disorders are rather common among children. This doesn’t imply that the adults are untouched with the same. As a matter of fact, living in the modern age polluted cities, amidst smokers, industries, and racing cars all of us are prone to the disease.

3. In case your bronchi are inflamed, there are chances for you to have bronchitis that is a known obstructive pulmonary disorder or illness.

4. Bronchitis can be divided in to the acute or short-term and the chronic or long-term categories.

5. Bronchitis can occur at any age.

6. It is quite closely associated with flues and colds.

7. In case the bronchitis is left uncured, it can lead to severe pneumonia.

8. Bronchitis is indeed common among smokers. 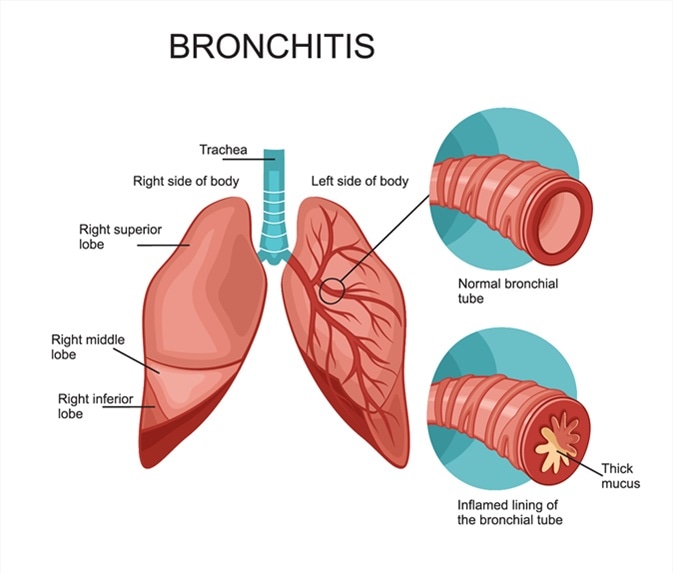 1. Acute bronchitis’ symptoms are quite similar to flu.

2. It lasts only for a short term.

4. This ailment is contagious & generally begins with a dry cough that often happens at night. Within a few days, the cough would progress. Quite soon the person would suffer from other symptoms like fever, fatigue, and headache. Curing this cough might take many weeks or many months. This is because the healing process in such cases is very slow, especially in your bronchial tubes.

5. In case you are suffering from a cough for a month or more, your doctor could refer you to check with an ENT expert to ensure if there are some other causes of the irritation. Yet, if your bronchial tubes remain irritated, this can lead to asthmatic conditions.

6. In acute bronchitis, your passageways constrict due to infection caused by some virus or bacteria. In case the ailment is due to bacteria, the apt antibiotic regimen can do the trick to cure the ailment. It is always advised to visit the doctor to get a medical diagnosis. Remember taking any medicine without the doctor’s prescription could make the disorder rather worse.

7. Persistent cough & wheezing also imply that you might be suffering from acute bronchitis. The constricted bronchial tubes create a wheezing sound every time we breathe. While this disorder can be cleared up in a few days, in some cases it might take several months or weeks as well. Remember in such a situation, you must take a lot of rest and drink lots & lots of water or juices.

8. A simple home remedy to fight back this disease is placing wet blankets & towels in varied places in the house to increase the humidity there. Room humidifiers are also a good option for such patients.

9. Smoking is anyways injurious to health but in case of the bronchial patients, it can be disastrous. So, smokers suffering from acute bronchitis must quit the habit of smoking before the condition gets worst.

1. This is an ongoing condition.

2. Curing this might take several months or even years.

3. The environmental factors that lead to this ailment are exposure to fumes, smoke, dust, odors, etc.

4. Chronic bronchitis is incurable, so the patients must consult their doctor well enough to identify the triggers. They should then remove as many triggers as possible form their environment to keep them healthy.

5. Remember, in this ailment prevention is equivalent to cure so you must work on removing the triggers else, it could be dangerous for you.

6. Consulting the doctor, they would suggest you several laboratory tests like tests for pulmonary function & blood gases in arteries, chest x-rays, and sputum culture. Generally, these tests are also done for patients with acute bronchitis.

7. Just like acute bronchitis, smoking can make the situation worst for patients with chronic bronchitis as well. So you must quit this bad habit to keep healthy and get rid of this ailment.

8. A healthy & active lifestyle is unbeatable at the end of the day. Practicing all preventive measures can avoid bronchitis and many other ailments for all individuals.

The primer symptoms of bronchitis are:

These symptoms can further lead to other respiratory problems like:
i. sinusitis
ii. asthma
iii. complicated pneumonia

1. While bronchitis is a very common respiratory disorder, it is often misdiagnosed in the absence of proper para clinical & physical examinations. To get an accurate diagnose, laboratory analysis & pulmonary tests are a must.

2. Bronchitis calls for special attention before the damage is enhanced further. When the infection is bacterial, fever is the chief indication. In around 80% of cases, the treatment is accomplished in just 5-10 days with the right anti-biotics. Remember, the anti-biotic or any medication must be taken with the doctor’s advice else it could be devastating.

3. Antibiotics have several side effects like abdominal pain, diarrhea, rashes, etc. that can’t be neglected. These cause a lot of discomfort for the patient. Yet they are acceptable only if they are necessary.

4. In case the infection is caused due to a virus, or other agents, antibiotics are not effective. In such periods the only treatment is to rest for a long time period, use room humidifiers, and hydrate the patients’ bodies with a lot of water and juices. In case things do not get fine within a few days, you must consult a doctor. It might be pneumonia and/or asthma bronchitis.

6. Bronchodilators are the medications administered to patients who have a difficulty in breathing. These help in re-establishing the process of respiration. These are commonly prescribed to patients suffering from chronic bronchitis & asthma.

7. Bronchitis could be dangerous and it is advisable to get treated as soon as possible to avoid all complications.