What causes lung cancer and why?

The most common cause of lung cancer (small cell [SCLC] and non-small cell [NSCLC]) is smoking (SCLC and NSCLC) – including passive (secondhand) smoke. However, other causes may include:

The main reason for the onset of lung cancer is because the lungs are one of the organs most exposed to the external environment, more of than any other organ in the body.

What are the symptoms of stage IV lung cancer?

Early lung cancer symptoms are not usually apparent for most sufferers; however, as they do become apparent – later-stage symptoms may include the following: 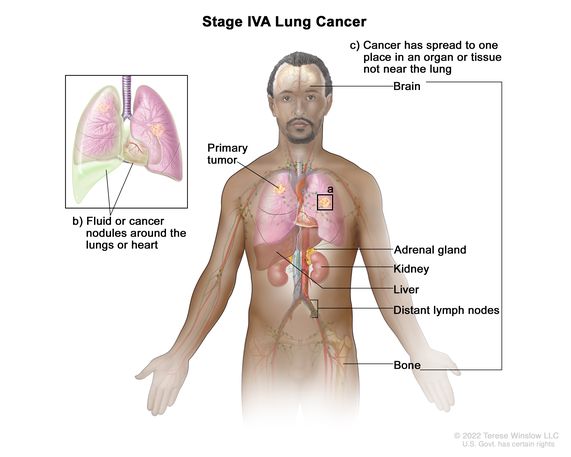 What treatment is available for stage IV lung cancer?

Due to lung cancer not usually being diagnosed until at a late stage – options are usually limited to trying to prevent more metastasis and to try to give a patient an extended prognosis (life-expectancy).

However, chemotherapy (to prolong a patient’s prognosis) is usually the treatment of choice – as surgical treatments are of little use due to the metastasis of cancer already having affected too many organs in the body (impossible to remove so much of the body and for a patient to survive afterward).

Other palliative therapies (complementary) may also be considered, such as radiation therapies, and clinical trial therapies [usually a combination of drugs and new treatments]).

What is the prognosis for stage IV lung cancer?

Sadly the prognosis for stage IV lung cancer is poor to say the least (due to late-stage discovery). In most cases, there is estimated to be only a 10% 5-year survival rate for NSCLC, and with a median survival rate [when 50% of patients are still alive, and 50% have passed away] of only around 8-months. This further gets reduced to around a 5% 5-year survival rate with SCLC, and only a few months when it is not treated.

Although, influential factors may include: age, health, choice of treatment and the patient’s response to that treatment, and the specific characteristics of the tumor. Also, it has been known for certain cancer patients to have survived against all odds longer than others (due in the main to the body being more accommodating towards treatments).