When a cell signalling molecule binds to a specific receptor, it activates a series of intracellular targets located downstream of the receptor. Several molecules associated with receptors have been identified:

Members of the transforming growth factor-ß (TGF-ß) family are protein kinases that phosphorylate serine and threonine residues (rather than tyrosine). TGF-ß inhibits the proliferation of their target cells. 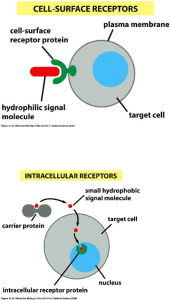