Motile bacteria, except spirochetes, possess one or more unbranched, long, sinuous filaments called flagella, which are the organs of locomotion.
Structure

They are long, hollow, helical filaments, usually several times the length of the cell. They are 3-20 µm long and are of uniform diameter (0.01-0.013 µm) and terminate in a square tip. It originates in the bacterial protoplasm and is extruded through the cell wall. Flagella is made up of of largely or entirely of a protein, flagellin. Though flagella of different genera of bacteria have the same chemical composition, they are antigenically different. Flagella are highly antigenic and flagellar antigens induce specific antibodies in high titers. Several of the immune responses mounted by host systems are directed against these flagellar antigen. Flagellar antibodies are not protective but are useful in serodiagnosis. Flagella can be found on both gram-positive and gram-negative bacilli. Most cocci are immotile, whereas about half of the bacilli and almost all of the spirilla possess flagella.
Parts and Composition
Each flagellum consists of three parts (Fig. 3.8).
i. Filament
ii. Hook
iii. Basal body.
i. Filament: The filament is the longest portion which extends from the cell surface to the tip.
ii. Hook: The hook is a short, curved segment which links the filament to its basal body and functions
as universal joint between the basal body and the filament.
iii. Basal body: The basal body is embedded in the cell (cytoplasmic membrane). In the gram-negative bacteria, the basal body has four rings connected to a central rod (L, P, S and M). The outer
L and P rings associated with the lipopolysaccharide and peptidoglycan layers respectively. S
ring is located just above the cytoplasmic membrane and the inner M ring contacts the cytoplasmic membrane.
Gram-positive bacteria have only two basal body rings, an inner ring connected to the cytoplasmic membrane and an outer one probably attached to peptidoglycan. 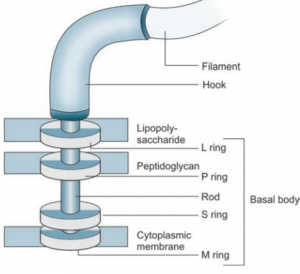 The structure of bacterial flagellum 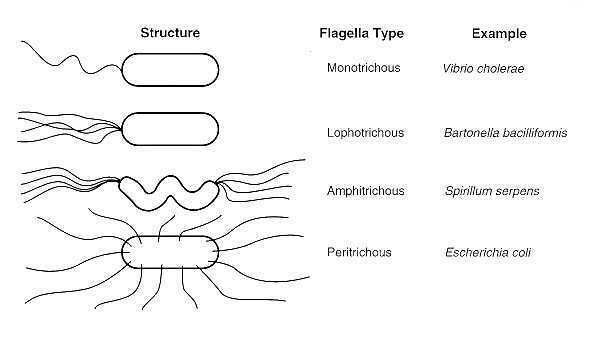 Demonstration of Flagella
Flagella are about 0.02 µm in thickness and hence beyond the resolution limit of the light microscope. The following methods are used for its demonstration:

i. Dark ground illumination: In special circumstances by dark ground illumination.
ii. Special staining methods: By the use of special staining methods in which their thickness is increased by mordanting.
iii. Electron microscopy.
iv. Indirect methods: Indirect methods by which motility of bacteria can be seen or demonstrated due to the difficulty of demonstrating flagella directly.
a. Microscopically in fluid suspensions (in a hanging drop or under a coverslip): On microscopic examination of wet films, motile bacteria are seen swimming in different directions across
the field, with a darting, wriggling or tumbling movement.
b. By spread of bacterial growth as a film over agar, e.g. swarming growth of Proteus sp.
c. Turbidity spreading through semisolid agar, e.g. Craigie’s tube method.