Modern classification of viruses is elaborated by International Committee on Taxonomy of Viruses (ICTV). ICTV is a committee of Virology Division of the International Union of Microbiological Societies.

The data concerning actual viral classsification are periodically published in ICTV Reports and releases. The last 9th Report was developed in 2009-2012; the latest release of virus taxonomy was presented in 2015.

According to ICTV principles, universal classification of viruses operates with taxonomic levels of order, family, subfamily, genus, and species.

Current version of international classification of viruses comprises 7 viral orders, 111 families that include at least 27 subfamilies and 609 genera with more than 3700 viral representatives. Nevertheless, hundreds of viruses are not classified yet.

Not all, but many viral families are organized into orders.

For instance, several families are included into the order Mononegavirales; among them Filoviridae, Paramyxoviridae and Rhabdoviridae harbor the large number of viruses, pathogenic for humans.

Viral families and subfamilies encompass numerous genera. Genus names are ended with the suffix -virus (e.g. Orthomyxovirus, Hepatovirus, Rubivirus and many others.)

ICTV designates viral species as “…a monophyletic group of viruses whose properties can be distinguished from those of other species by multiple criteria”. Among these multiple criteria are:

– the degree of relatedness of viral genomes or genes;

Monophyletic group means the closely related population of viruses where all the members originated from the common ancestor.

This is determined on the base of viral phylogenetic analysis with molecular genetic methods, mainly by sequencing of viral nucleic acids (DNA or RNA).

In case of absence of full genomic data the sequencing of viral proteins is proposed.

However, the uniform genetic criteria suitable for delineation of any viral species are not elaborated. For instance, the plant viruses from the family Geminiviridae are established from the same species in case of genetic identity from 90%, whereas for ebolaviruses this criterion is equal to 70% of their RNA relatedness.

That’s why above mentioned additional criteria for virus speciation are used.

Taxonomic ranks from genus and above are described by ICTV as the group of related taxa of lower level (e.g., for viral genus – the number of viral species) that share certain common properties.

Taking into account the existing difficulties of viral taxonomy accompanied with low accessibility of genetic sequencing and other advanced molecular tests for most of clinical laboratories parallel viral division into 7 distinct groups is commonly used in practice.

This classification was primarily proposed by Nobel Laureate US virologist D. Baltimore still in 1971.

There are the next viral groups according to Baltimore classification:

Further division of viruses within the groups is possible by viral type of symmetry, presence or absence of envelope, etc.

It is established to date that above 300 viral species that pertain to more than 30 families can cause human diseases. The current list of viral human pathogens is only expanding all the time.

The viral families of most medical relevance are presented in Table . 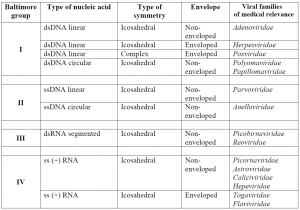 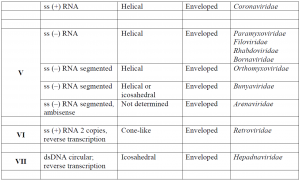 For individual precise identification of viruses especially isolated from the clinical source further infraspecies division of viruses is required.

Nevertheless, ICTV states that viral division below the rank of species is not regarded as a part of official taxonomy of viruses.

According to ICTV, the classification and naming of serotypes, genotypes, strains, variants and isolates of the same virus species “…is the responsibility of acknowledged international specialist groups”.

Particular types and variants of the same virus can be greatly different in their virulence against the human host.

Viral isolate is a pure viral culture isolated from the certain patient in the course of infection.

Viral strain is defined as geneticaly homogenous population of viruses sharing the number of established common characters that distinguish this strain from other viral populations of the same species. After detailed identification the strain is designated with number, date, point of isolation, etc. and stored in viral collection.

It is generally ascertained that viral members of the same strain share genetic identity at least more than 90%.

The variant of the same virus usually displays even higher genetic relatedness – about 96-98%.

Nevertheless, in many cases the viruses demonstrate low genetic stability due to the elevated frequency of mutations and recombinations.

During the course of infection the primary virus that initially affected the host undergoes rapid individual evolution. It results from intensive viral replication with multiple mutations as well as from the action of host immune system and/or administered antiviral treatment.

This leads to formation of so-called viral “quasispecies”. It is not a taxonomic category.

In general, quasispecies is a total number of closely related genetic variants arisen from intensive mutations of primary virus (“mutant cloud”) in the course of individual viral infection.

The emergence of quasispecies is extremely significant in progression of viral infection. The ongoing pressure of host immune system and the influence of antiviral drugs promote the selection of resistant viral mutants. This creates new genetic lines resistant to antiviral therapy and therefore, leads to chronic viral disease