An antibody that requires complement to complete the lysis of its antigenic target cell is termed a lysin or cytolysin. When lysins act in conjunction with the intrinsic complement system on red blood cells, the cells hemolyze (lyse and release their hemoglobin). This lysin-mediated hemolysis is the basis of a group of tests called complement fixation, or CF.

antibody, antigen, complement, and sensitized sheep red blood cells—and it is conducted in two stages. In the first stage, the test antigen is allowed to react with the test antibody (at least one must be of known identity) in the absence of complement. If the Ab and Ag are specific for each other,they form complexes. To this mixture, purified complement proteins from guinea pig blood are added. If antibody and antigen have complexed during the previous step, they attach, or fix, the complement to them, thus preventing it from participating in further reactions.

The extent of this complement fixation is determined in the second stage by means of sheep RBCs with surface lysin molecules. The sheep RBCs serve as an indicator complex that can also fix complement. Contents of the stage 1 tube are mixed with the stage 2 tube and observed for hemolysis, which can be observed with the naked eye as a clearing of the solution. If hemolysis does not occur, it means that the complement was used up by the first stage Ag-Ab complex and that the unknown antigen or antibody was indeed present. This result is considered positive. If hemolysis does occur, it means that unfixed complement from tube 1 reacted with the RBC complex instead, thereby causing lysis of the sheep RBCs. This result is negative for the antigen or antibody that was the target of the test. Complement fixation tests are invaluable in diagnosing fungal diseases such as coccidioidomycosis, and histoplasmosis. It is also used to detect antibodies to Coxiella burnetii,the cause of Q fever. 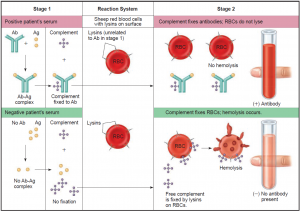