Complement is a system of enzymes and proteins contributing to the lysis of target cells.

The complement system includes serum and membrane-bound proteins that function in both specific and non-specific immune reactions. They are activated via a chain of proteolytic cascades. The term “complement” indicates the ability of these proteins to complement (augment) the effects of other components of the immune response (antibodies, phagocytes, etc.).

The complement system consists of about 30 proteins designated by the numbers C1 through C9 (components of the classical pathway), in addition to various factors of the alternative pathway (e.g. B, D, H, and I factors, properdin and others). These proteins act in a series of steps, where the activated component of complement splits the next one in the cascade of activation.

The complement system has the following main effects:

Complement proteins are synthesized mainly in the liver and by different phagocytic cells. The complement is quite sensitive to heating. It is inactivated after exposure at 56°C for 30 minutes and also during long-term storage, under the influence of UV-radiation and by various chemical substances, whereas immunoglobulin molecules are more resistant and can withstand heating at 56°C.

Most of the complement components are proenzymes, which must be cleaved to form the active molecules. The components of the classical pathway are numbered from С1 to C9, and the reaction sequence is С1→C4→C2→C3→C5→C6→C7→C8→C9.

The complement reaction can take one of three pathways. The first one is the classical pathway that is initiated by certain specific immune reactions, predominantly by antigen-antibody complex formation.

The second is the alternative pathway, which is triggered by versatile non-specific stimuli (e.g., polysaccharides of microbial cell wall and capsule, aggregated immunoglobulins, drugs and various chemical substances).

The third lectin pathway is strongly related to the mechanism of the classical pathway. It is activated by host lectin proteins that bind to carbohydrate residues of microbial cells.

Only IgM and IgG can fix and activate the complement via the classical pathway. Antibodies of these Ig classes were named lysins, which initiate the lysis of bacteria, fungi, parasites and animal cells.

Activation starts from the C1 component. It binds to a CH2-domain of Fc portion of immunoglobulin molecule.

The component C1 is composed of three proteins: Clq, C1r, and С1s. The completed C1qr2s2, attached to the antibody-antigen complex, cleaves C4 and C2 to form C4b2b. The latter complex is an active C3 convertase or convertase of the classical pathway, which transforms C3 molecules into two fragments: C3a and C3b.

C3 molecule is the mainstay of all pathways of the complement system. Its C3b fragment promotes further complement activation that eventually results in cell lysis and death.

Also, C3b plays the role of potent opsonin, when it binds to the foreign cells and other particles. Consequently, this event is followed by C3b interaction with complement receptors on phagocytic cells (e.g., CD35), thereby promoting opsonization.

One more reaction cascade is activated through the release of C3a. C3a is a highly reactive anaphylatoxin with pleiotropic biological effects. In particular, it intensively stimulates macrophages resulting in acute inflammation.

In the classical pathway C3b comes into contact with a complex C4b2b, producing a new enzyme, C5 convertase, which cleaves C5 to form C5a and C5b.

C5a is the most potent anaphylatoxin and a chemotactic factor (chemoattractant). C5b binds to C6 and C7 to form a complex that plunges into the membrane of the target cell. Then C8 binds to the C5bC6C7 template and joins up to 16-20 C9 molecules to produce the membrane attack complex (MAС) that directly causes cytolysis. MAС resembles in its action cytotoxic protein perforin of killer cells. 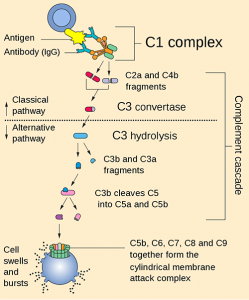 The Alternative and Lectin Pathways

As a result, the alternative pathway C3 convertase (С3bBb) is formed that acts on C3 and generates more C3b molecules. The additional C3b binds to the C3 convertase to produce С3bBbC3b, which is the alternative pathway C5 convertase. This complex is stabilized with serum protein properdin. At the next step, it cleaves C5 into C5a and C5b, making C5b active. The rest of the activation sequence is the same as in classical pathway leading to the production of membrane attack complex.

One more additional pathway of complement activation is termed as lectin pathway. Its main activators are the proteins lectins that specifically bind to the carbohydrate moiety of microbial cells.

For instance, mannose-binding lectin (MBL) of human plasma actively binds to sugar residues like mannose found in polysaccharides of the microbial outer membrane (e.g., LPS). Binding of MBL to microbial cell activates MBL-associated serine protease that acts on C4 of the classical pathway. Thus, except the initial phase of activation by lectin molecule, the steps of the lectin pathway become literally the same as in the classical pathway of activation of the complement system.

A vast number of serum and tissue proteins regulate the complement system at different stages. For example, C1 inhibitor inactivates the serine protease activity of C1r and С1s. Other proteins have the ability to accelerate the decay of the complement molecules. Among them is a decay-accelerating factor (DAF), a membrane-bound protein found on most blood cell membranes. It can accelerate the dissociation of C3 convertases of both pathways. Similarly, factor S or vitronectin prevents the assemblage of the membrane attack complex. 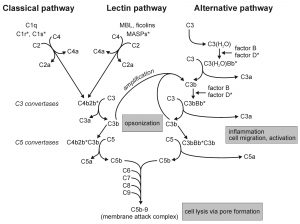 The Role of Complement Activation in Immune Response

Insertion of the C5bC6C7C8C9 MAC complex into the cell membrane promotes lysis and killing of many types of target cells, including erythrocytes, bacteria, and tumour cells.

If coated with C3b, antigen-antibody complexes, microbial cells, and other particles become much more efficiently ingested by phagocytes (macrophages, neutrophils, etc.) It results from the phagocyte expression of C3b receptors on their surface. Successful clearance of immune complexes out of bloodstream prevents the emergence of autoimmune reactions.

Several fragments of complement proteins, e.g. C5a or C3a, stimulate directed movement of neutrophils and other cells towards the inflammation area.

C3a, C4a, and C5a can provoke degranulation of mast cells and basophils with a massive release of mediators of allergy, leading to increased vascular permeability and smooth muscle contraction.