Composition of a typical prokaryotic cell

The model Bacterium is Escherichia coli, normally found in the colon of humans and other mammals. It has a limited capacity for independent existence, is motile and rod shaped, about 2 mm long and 1 mm wide. Its cell wall is Gram-negative in structure. Morphologically E. coli resembles many other Bacteria and some members of the Archaea, although the fine structure of the cell wall, biochemistry, and molecular biology differ considerably. The single circular chromosome is attached to the cytoplasmic membrane and this DNA is free in the cytoplasm. The word ‘prokaryote’ is derived from the Greek pro (before) and karyote (literally a nut’s kernel, but biologically adapted to mean nucleus), so this prenucleate state defines the prokaryotes. There are generally no discernible subcellular components in Bacterial cells, the exception being the presence of layered membrane bodies of unknown function in the methanotrophic and nitrifying Bacteria. The main subcellular differences are that the following are absent from Bacterial and Archaeal cells:

Bacteria and Archaea come in a variety of shapes and sizes  and are classified according to their biochemical rather than morphological differences. The differences between the Bacteria and Archaea are broad, covering the machinery used for replication, transcription, translation, and central metabolism. Overall they are linked by a common cell structure and share many ecological niches, but in this respect are a product of convergent evolution. 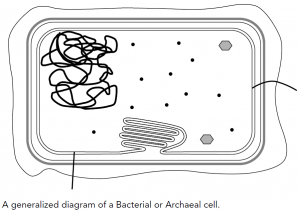 In common with all biological membranes, the Bacterial membrane between the cytoplasm and the cell wall is composed of a lipid bilayer, made up of two tiers of phospholipids. These phospholipids are arranged so that their hydrophilic heads face into the cytoplasm or the outside world, while the hydrophobic tails are embedded within the membrane. Many proteins are partially buried within the membrane, or pass right through it. These proteins have many final functions but all mediate transport in one form or another f1f0 ATPase regulates the transport of H+, sugar transporters regulate the flow of carbohydrate, and so on. The lipid bilayer is impermeable to H+, as without this property the organism would be unable to generate ATP. The current model of the cell membrane allows passage of:

The cytoplasmic membrane does not give rigidity or shape to the cell as this is provided by the tougher cell wall. Bacterial cell membranes lack the sterols eukaryotes have but instead stabilize membrane structure with hopanoids. The Archaeal cell membrane performs the same roles as the Bacterial equivalent, but it is unique in biology with a predominantly monolayer phospholipid structure.

Around 80% of the cytoplasm is water, the other fifth is protein, lipid, nucleic acid, carbohydrate, inorganic ions, and other low molecular weight compounds. The cytoplasm is the medium for enzyme activity and contains the ribosomes. Other subcellular structures that may be present are inclusion bodies (storage granules made of compounds such as the membrane-associated poly-b-hydroxybutyrate or cytoplasmic polyphosphate), carboxysomes (sites of CO2 fixation) and magnetosomes. The magnetosome is found in magnetotactic bacteria such as Magnetospirillum and is thought to play some role in biomineralization.

The major drawback in the study of the fine structure of prokaryotes is the method used to view such small objects. Electron microscopy (EM) has provided us with many of the details given here and in other texts, but the harsh methods used to fix and develop the samples are prone to generation of artifacts. An example of this is the mesosome, a small vesicle seen in many EM preparations, often seen budding from the cell membrane. It is possible that these have one of the proposed roles in cell division, cell wall synthesis or chromosome resolution, but it seems more likely that mesosomes are created during the EM drying and fixation process.

The Bacterial chromosome(s) are often found in one area of the cell, normally close to the cytoplasmic membrane. Chromosomes are tightly supercoiled and are associated with chromatin, proteins much like those found in eukaryotes but lacking basic histones. In contrast, it is thought that the chromatin of Archaea is very much like that of eukaryotic microorganisms. The tightly packed nuclear material is referred to as the nucleoid in prokaryotes and is complemented by plasmids floating free in the cytoplasm. The size of some plasmids approaches that of chromosomes and the distinction between the two is sometimes esoteric. However, the chromosomal complement of a prokaryotic cell is always haploid and plasmid copy number is often more than one.

Gram-negative Bacteria have a second phospholipid bilayer (the outer membrane) enclosing the cytoplasmic membrane. A periplasm, the space between the outer and cytoplasmic membranes, is thought to be aqueous but has much lower water content than the cytoplasm. An examination of the estimated total protein content suggests that the periplasm may even have a gel-like state. It is the site of several important reactions, taking a major role in the generation of ATP, environmental sensing, denitrification, and many other metabolic pathways that interact directly with the electron transport chain. There has been continued debate about the existence of similar environments in Gram-positive Bacteria, with recent suggestions that a gel-like stratum exists outside the Gram-positive cell membrane, but is not bounded by another membrane.

Prokaryotic cells are strong compared with eukaryotic single cells. The basis of their strength comes from the cell wall, which is present in all prokaryotes apart from the Bacterium Mycoplasma and the Archaeal Thermoplasma. The Bacteria are covered in a semirigid compound called peptidoglycan in most cases, with the exception of the Chlamydia. In these Bacteria the cell wall rigidity is provided by cysteine-rich membrane proteins interlinked with disulfide bonds. The Archaea have a far greater variety in the composition of the outer wall, but have a Bacterial ortholog in pseudomurein.

A small number of Bacterial genera, most significantly Clostridium and Bacillus, are able to form spores within the cytoplasm in response to cell starvation.

The ability of endospores to survive heat, radiation, and chemical disinfectants coupled to the pathogenic nature of some members of Clostridium and Bacillus have led to the efficient sterilization procedures developed for bacteriology and medicine.

All prokaryotes secrete a covering of polysaccharide or polypeptides sometimes known as the slime capsule. The actual size and composition of this glycocalyx vary with the metabolic state of the organism. In many pathogens it is the first line of defense against host recognition. The slime capsule may also help the cell to resist drying out and aid in cell attachment. The interaction of the glycocalyx with other bacteria from the same or different species helps to form biofilms such as plaque on teeth and the bacterial filaments sometimes seen in aquatic environments. A more ordered structure is also present in some Bacteria and Archaea. A crystalline glycoprotein S-layer can form a mesh surrounding the cell and has been linked to attachment, biofilm formation, and the repulsion of host defenses.

Bacterial motility is often provided by the rotation of flagella, long filaments extending outside of the glycocalyx. After suitable staining, these can often appear to be the dominant feature of cells such as those of Salmonella. Prokaryotes are also coated with other finer hair-like appendages that are generally classed as fimbriae. There are currently seven different types known, identified on the basis of their protein composition, length, and diameter. They are often seen as broken filaments surrounding the cell in electron micrographs, suggesting that they are brittle and dispensable. Some are pathogenicity factors, but it is thought that most function in attachment. Finer still are the fibrils that coat the surface of bacteria such as Streptococcus. The limitations of the electron microscope make it difficult to say whether these are a separate type of hairy coat or an artifact from the drying of the glycocalyx. The largest filamentous structures outside the cell are the sex pili generated by F+ bacteria before transduction. 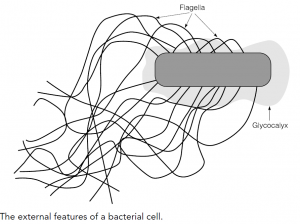