Structure and Properties of Corynebacterium diphtheria 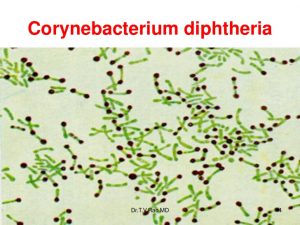 C. diphtheriae are relatively resistant to various environmental factors. For instance, they survive for two months at room temperature. Corynebacteria remain viable in the membranes of diphtheria patients at least for 2 weeks, in water and milk – for 20 days. The bacteria are killed by a temperature of 60°С and by 1% phenol solution in 10 minutes.

Pathogenesis and Clinical Findings in Diphtheria

Specific Treatment and Prophylaxis of Diphtheria