DNA replication in all organisms takes place via similar mechanisms, but much of the detail has been gained from our understanding of the molecular biology of the bacterium Escherichia coli. In all bacteria, DNA replication is triggered by cell mass, but the speed of genomic duplication varies from species to species. In E. coli, new bases are added at approximately 1000 nucleotides per second (nt s–1), but in Mycoplasma capricolum this rate falls to only 100 nt s–1. This means that, although the mycoplasma has a considerably smaller genome, both bacteria can completely replicate their genomes in around 45minutes.

There are two rules that govern how DNA replication can occur. The first is that replication is semi-conservative, in that double-stranded DNA is separated and each strand acts as a template for synthesis of a new strand composed of bases exactly complementary to the template. The second is that all nucleic acid polymerases (DNA and RNA polymerases) synthesize DNA in a 5’ to 3’ direction using a primer to initiate synthesis. This primer is RNA, whether or not DNA or RNA is to be synthesized. Nucleotides (also known as bases) are added to the exposed 3’-hydroxyl group of the primer so that they are exactly complementary to the template strand (A matched with T or U; C matched with G).

▶Synthesis of nucleic acids by polymerases

All enzymatic extension of polynucleic acids requires a template and the synthesis of nucleic acids proceeds in a 5’ to 3’ direction. The RNA and DNA polymerases, in common with many other enzymes associated with nucleic acid metabolism, also require Mg2+ or a similar divalent ion to function. This ion is not strictly a prosthetic group for these enzymes, but helps in the binding of nucleotides to the active site. All the bacterial nucleic acid polymerases share a common structure, in that the protein around the active site folds to form a structure that could be said to be like a hand. The template polynucleotide binds to the palm (the active site) and nucleotides enter between the thumb and forefinger.

Bacterial cells have a variety of DNA polymerases each with specialized functions, but most only have one RNA polymerase. In contrast most eukaryotes have a plethora of both specialized DNA and RNA polymerases. Unfortunately our knowledge of the cell biology of the Archaea is not sufficiently developed to be able to draw many inferences on this topic, but we do know that their primary replicative polymerase resembles one class of eukaryotic DNA polymerase more than any of the bacterial types.

Our knowledge of Bacterial chromosomal replication is mostly limited to circular chromosomes composed of double-stranded DNA. Rather than being arranged as a simple circle, the DNA is supercoiled – twisted and folded in on itself. This is to compact the DNA into the very small volume of the cell. The model microorganism, E. coli, is only 2 or 3 mm long, yet its 4.6 million bp chromosome is about 1 mm in circumference. The number of supercoils in the genome is determined by the competitive action of two winding and unwinding enzymes, topoisomerase I and DNA gyrase. The equilibrium between the two is established according to the physiological state of the organism, so is influenced by external environmental factors. In addition, topoisomerase and gyrase have to act locally to allow DNA replication to begin. The supercoiled DNA must first be relaxed to allow replication proteins access to the template strands.

Once DNA replication has been initiated, a large number of enzymes must function to allow DNA polymerase access to the template strand. The DNA is separated into single strands by DNA helicase, and spontaneous re-annealing is prevented by single-stranded binding protein (SSB). The primosome is then formed in the developing replication bubble, allowing the binding of DNA primase. This primase adds a few complementary RNA nucleotides to the template strand, which acts as a primer for the main DNA replication complex, DNA polymerase III. The extension of DNA complementary to the template strand means that the replication bubble can be extended quickly. However, it was less clear for many years how the other strand (often called the lagging strand) was replicated at the same time and yet still synthesized from 5’ to 3’.

An elegant explanation of the extension of the replication bubble was that it was discontinuous, again using DNA polymerase III extending from RNA primers. It was found that primase regularly adds short RNA fragments (Okazaki fragments) to the lagging strand, allowing DNA polymerase III to extend from 5’ to 3’ until it meets the next RNA primer, where extension stops. The lagging strand is, for a short time, a DNA:RNA heteroduplex, before DNA polymerase I functions in its repair mode and removes RNA with an exonuclease activity, replacing it with complementary DNA nucleotides. Any gaps in the newly synthesized lagging strand are then resolved by DNA ligase. In this way, both the template (or leading) and lagging strands of the replication bubble are quickly and accurately replicated.

At each stage of DNA replication, the sequence of the newly synthesized DNA is checked to see that it exactly matches the template strand, a function known as proofreading. First the incorporation of each nucleotide is dictated so that it exactly matches the complementary template base just by the shape of the DNA polymerase III active site. A separate active site in the enzyme (in the epsilon subunit) then checks the base pairing again after incorporation as the polymerase moves down the template strand. Similarly, DNA polymerase I has a proofreading domain in many organisms (though not in E. coli) to ensure that the replacement of RNA with DNA is accomplished without error. DNA polymerase I also participates in the continuous checking of the replicated double-stranded genome as part of the mutation repair systems. 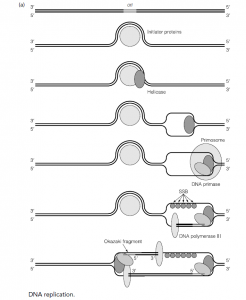 ▶Termination of synthesis and resolution of replicated circular genomes

The termination of synthesis of a copy of a circular Bacterial genome is signaled by a region coded within the DNA. This site is at a 6 o’clock position on the genome, if the ori is at 12 o’clock. A terminator utilization substrate (Tus) binds at this site, stopping the movement of the two replisomes. This might appear to be the end of the replication process, but the cell is now faced with the challenge of separating the two complete chromosomes from one another. Without an effective means of resolving the two chromosomes, they will remain intertwined with one another. Two intertwined genomes close to one another are prone to generalized recombination and must be separated as quickly as possible. A short DNA sequence known as dif is found in the middle of the termination region, and here the proteins XerC and XerD bind both double helices and, via a transient DNA/protein complex known as the Holliday junction, cut and resplice the DNA to form two separate circular chromosomes. Thus a process of site-specific recombination stops more widespread generalized recombination. 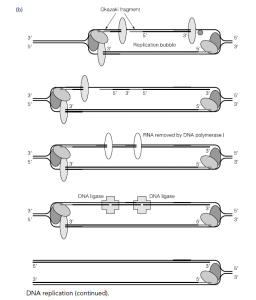 A Bacterial chromosome is typically presented as a single circle of double-stranded DNA. In reality, the situation is far more complex. Most importantly Bacteria may have one or more chromosomes, each of which may be linear or circular. However, the full details of the mechanisms of bacterial linear DNA replication have yet to be fully elucidated. The linear chromosome of Borrelia burgdorferi has an origin of replication in the center, and presumably replicates bidirectionally, although the mechanisms of termination are unclear. More unusual mechanisms of linear chromosome replication are exhibited by the bacteriophage, such as the Bacillus phage j29, where replication is initiated at either end of the chromosome and is terminated in the center by the collision of the two replisomes. Similar systems may exist in other Bacteria and Archaea. 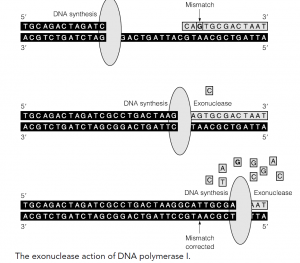 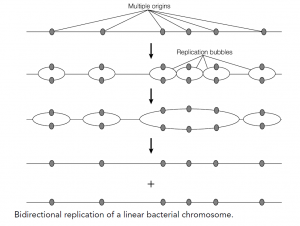 As with all organisms, microorganisms have mechanisms to preserve their DNA genome so that their genetic complement is stably passed from generation to generation. However, in contrast with higher organisms, Bacteria and Archaea have no method of replication-based recombination so have to rely on processes of direct genomic change to enable diversity in their populations. Microorganisms face many environmental factors that could possibly cause mutation in their genomic DNA. Permanent changes in the DNA caused by external factors are known as induced mutagenesis. Those changes caused by errors in the DNA replication machinery, or other mistakes made by the cellular DNA metabolizing enzymes are known as spontaneous mutagenesis. The rate of error in DNA replication is between 10–7 and 10–11 per base pair per round of replication, equivalent to around 10–4 to 10–8 errors per gene, per generation in a bacterium the size of E. coli. Spontaneous change can also include those genomic rearrangements that an organism may make to its own genome, as exhibited by Streptomyces. These mutation hot spots on the genome are normally associated with an abundance of short inverted repeats. It is thought that the repetitive nature of the sequence causes polymerase to stutter and make more errors at these particular points.

A strain isolated from its environment and held in pure culture in the laboratory is defined as the wild type of a particular strain. Any strain derived from the wild type with any change in its genomic make up compared with this wild type is known as a mutant. This change can be referred to as a change in genotype. If the difference in genotype results in an observable change to the properties of the organism, such as a sudden inability to use a particular carbon source, this is said to be a change in phenotype. Changes in dependence on medium components are frequently used in the elucidation of biochemical pathways or in the deduction of regulatory systems, so the mutation of the wild type with a nutritional requirement is a common experiment. These strains are known as auxotrophs. For example, if E. coli is subjected to a chemical mutagen and as a result of mutation now requires the vitamin B12 to be present in its medium for the strain to grow, the strain is auxotrophic for B12, or can be called a B12 auxotroph.