▶Microbiology and the discovery of DNA

Microbiology has played a pivotal role in the discovery of the mechanisms involved in the transfer of information within and between cells. The biggest milestone in molecular genetics was the elucidation of the structure of DNA by Watson, Crick, Franklin, and Wilkins in the early 1950s, but the cellular role for this macromolecule had already begun to be established.

Although biochemistry was well advanced by 1930, the identity of the molecule responsible for the transfer of genetic information between mother and daughter cell was not agreed upon. Protein was held to be the most likely candidate as it held sufficient diversity in sequence to code for the many cellular variations. DNA had been purified as early as 1868 (by Friedrich Miescher, from pus in surgical bandages) and many of its characteristics determined, but had not been explicitly linked to information flow. A breakthrough came in 1944 when Avery, MacLeod, and McCarty showed that DNA could confer virulence on non pathogenic Streptococcus pneumoniae. This finding was built on earlier work by Griffith, who had shown that the same effect could be achieved with heat-killed bacteria. Griffith described virulent S. pneumoniae as smooth due to the appearance of the colonies on agar plates. The virulence factor is a capsule that causes the smooth colonies and allows the Bacterium to cause pneumonia in mice. The finding that live non capsulate Bacteria could cause the death of mice when mixed and incubated with heat-killed capsulate bacteria was not fully explained at the time. Griffith did not fractionate S. pneumoniae but did suggest that a subcomponent of the capsulate Bacteria was responsible, a component he called the ‘transforming principle.’

The fractionation was performed by Avery, MacLeod, and McCarty, who went on to not only find that the principle was DNA, but also propose that DNA was a carrier of genetic information. In many ways these experiments were a series of fortunate events, in that Griffith could have chosen many other Bacteria to study, but chose one that was naturally competent. Under the conditions he used. Furthermore, S. pneumoniae can be transformed by linear fragments of double-stranded DNA (dsDNA), and had Avery, MacLeod, and McCarty carried out their experiments with E. coli, they would not have obtained such easily explained results. Meanwhile, the debate over whether DNA was the only repository for genetic information continued. 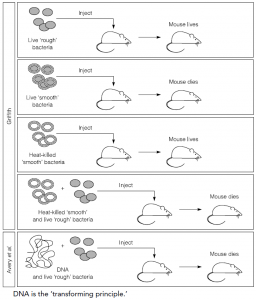 Another microbiological experiment was used to determine if DNA alone could be responsible for the persistence of genetic information in a daughter cell. The experiment supposed that labeled DNA would be detectable in all progeny of a cell, and conversely that labeled protein would also persist, if either were the primary informational macromolecule.

By interrupting the infection of E. coli by T2, by using a blender, they were able to separate the heads from the cells by centrifugation. In this way they demonstrated that the DNA entered the cell and caused a change but not the T2 protein, conclusively demonstrating that DNA carries genetic information.

▶The relationship of purines to pyrimidines

The composition of DNA had been rigorously examined by Chargaff and colleagues in the late 1940s. They established that DNA had a set of properties, commonly known as Chargaff’s rules. These were as follows: 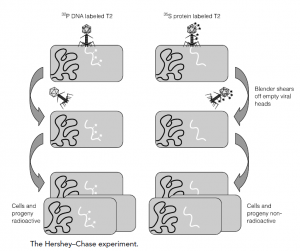 The process by which the structure of DNA was found to be a double helix has been well documented elsewhere. It is important to see the structure in the context of the previous chemical and biological evidence – for example, the double helix was only regular in the way that X-ray diffraction experiments suggested if G was paired with C and T with A. More remarkably, Watson and Crick were able to suggest much more about the biochemistry of DNA than the mere shape of the molecule alone. They proposed that the replication of DNA must be semi-conservative, with separation of the strands before synthesis of complementary DNA. Subsequently, the very nature of DNA as an informational macromolecule led them to suppose the existence of codons and thus to an adaptor hypothesis. In conjunction with the discovery of mRNA they proposed that, in order for amino acids to reflect DNA sequence, a molecule must intervene between the two. This led Crick to draw a molecule with many similarities to tRNA. The combination of these hypotheses surrounding DNA structure has led to the elucidation of most of our understanding of molecular biology, from gene to mRNA to protein (via tRNA).