Peter Mitchell theorized that the generation of ATP only occurred because mitochondria and Bacteria could pump protons across a membrane. These primary pumps lead to generation of a charge across the membrane, known as the proton motive force (PMF). As the protons try to move back across the membrane, the energy of their movement can be harnessed in a number of ways. The most important use of the PMF in many aerobic organisms is the generation of ATP, normally using the enzyme f1f0 ATPase. This ATP-generating enzyme is found in the cytoplasmic membrane of Bacteria and the inner membrane of the mitochondria and in the absence of the PMF actually cleaves ATP into ADP plus phosphate. However, when PMF is applied, the ATPase works essentially in reverse, generating ATP from ADP and phosphate. It is thus known as a secondary pump. For all this to happen efficiently, the organism or organelle must conform in several ways to the Mitchell hypotheses, which are as follows:

There are five types of component molecule.

Protons for the final reduction in the transfer chain are supplied by the disassociation of water, providing the build up of hydroxyl ions on the inside of the membrane. Protons flow back into the mitochondrial matrix or bacterial cell through the enzyme ATP synthase, driving ATP synthesis. This enzyme is in two parts, one localized on the Bacterial cytoplasmic or mitochondrial matrix side and the other which spans the membrane to the outside of the bacterial cell or the intermembrane space of the mitochondrion.

The rate of oxidative phosphorylation is set by the availability of ADP, electrons only flow down the chain when ATP is needed. When there are high levels of ATP and energy-rich compounds like NADH+ and FADH2, accumulation of citric acid inhibits the citric acid cycle and glycolysis.

The intermediates of glycolysis and the citric acid cycle are used as precursors of biosynthetic pathways. To maintain the energy-yielding processes of glycolysis and the citric acid cycle these lost intermediates must be replenished by anaplerotic reactions. Three carbon compounds are carboxylated to form oxaloacetate. Both pyruvate and phosphoenol pyruvate (PEP) can be used in these reactions, for example, oxaloacetate can be formed from the enzymatic addition of carbon dioxide to pyruvate or PEP. 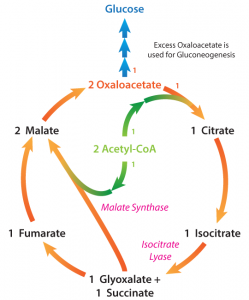 Fatty acids can be used as substrates for microbial metabolism. The metabolic process is called  β-oxidation and it occurs in the mitochondria of eukaryotes or the cytoplasm of prokaryotes. Two-carbon units are removed from the fatty acid to yield their acyl CoA. The pathway begins with the activation of the fatty acid by CoA. There then follow two separate dehydrogenation reactions where electrons are transferred to FAD and NAD+, finally yielding CoA and an activated fatty acid to restart the cycle.

Nitrate respiration uses the most common alternative electron acceptor, nitrate. The first step of the reaction is catalyzed by the enzyme nitrate reductase, an enzyme that is only synthesized under anaerobic conditions. The product is nitrite, which is excreted by most Staphylococci and Enterobacteria. Other Bacteria will reduce nitrite further to ammonia or nitrogen gas. This reaction, and the enzyme that catalyzes it, are termed dissimilatory because nitrogen is reduced during the biological breakdown of organic compounds. This type of respiration leads to denitrification. 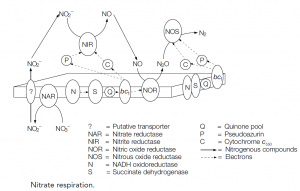