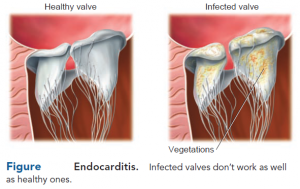 The acute form of endocarditis is most often caused by Staphylococcus aureus. Other agents that cause it are Streptococcus pyogenes, Streptococcus pneumoniae, and Neisseria gonorrhoeae, as well as a host of other bacteria. Each of these bacteria is described elsewhere in this book; all are pathogenic.

The most common route of transmission for acute endocarditis is parenteral—that is, via direct entry into the body. Intravenous or subcutaneous drug users have been a growing risk group for the condition. Traumatic injuries and surgical procedures can also introduce the large number of bacteria required for the acute form of endocarditis.

Prevention is based on avoiding the introduction of bacteria into the bloodstream during surgical procedures or injections. Untreated, this condition is invariably fatal. Recommended antibiotics are nafcillin or oxacillin with or without gentamicin. Alternatively, vancomycin + gentamicin can be used. High, continuous blood levels of antibiotics are required to resolve the infection because the bacteria exist in biofilm vegetations. In addition to the decreased access of antibiotics to bacteria deep in the biofilm, these bacteria often express a phenotype of lower susceptibility to antibiotics. Surgical debridement of the valves, accompanied by antibiotic therapy, is sometimes required.

Subacute forms of this condition are almost always preceded by some form of damage to the heart valves or by congenital malformation. Irregularities in the valves encourage the attachment of bacteria, which then form biofilms and impede normal function, as well as provide an ongoing source of bacteria to the bloodstream. People who have suffered rheumatic fever and the accompanying damage to heart valves are particularly susceptible to this condition.

Most commonly, subacute endocarditis is caused by bacteria of low pathogenicity, often originating in the oral cavity. Alpha-hemolytic streptococci, such as Streptococcus sanguis, S. oralis, and S. mutans, are most often responsible, although normal biota from the skin and other bacteria can also colonize abnormal valves and lead to this condition.

Minor disruptions in the skin or mucous membranes, such as those induced by vigorous toothbrushing, dental procedures, or relatively minor cuts and lacerations, can introduce bacteria into the bloodstream and lead to valve colonization. The bacteria are not, therefore, transmitted from other people or from the environment. The average age of onset for subacute endocarditis has increased in recent decades from the mid- 20s to the mid-50s. Males are slightly more likely to experience it than females.

The practice of prophylactic antibiotic therapy in advance of surgical and dental procedures on patients with underlying valve irregularities has decreased the incidence of this infection. When it occurs, treatment is similar to treatment for the acute form of the disease.

Septicemia occurs when organisms are actively multiplying in the blood. Many different bacteria (and a few fungi) can cause this condition. Patients suffering from these infections are sometimes described as “septic.” One infection that should be considered in cases of aggressive septicemia, especially if respiratory symptoms are also present, is anthrax.

Fever is a prominent feature of septicemia. The patient appears very ill and may have an altered mental state, shaking chills, and gastrointestinal symptoms. Often an increased breathing rate is exhibited, accompanied by respiratory alkalosis (increased tissue pH due to breathing disorder). Low blood pressure is a hallmark of this condition and is caused by the inflammatory response to infectious agents in the bloodstream, which leads to a loss of fluid from the vasculature. This condition is the most dangerous feature of the disease, often culminating in death.

The vast majority of septicemias are caused by bacteria, and they are approximately evenly divided between gram positives and gram-negatives. Perhaps 10% are caused by fungal infections. Polymicrobial bloodstream infections increasingly are being identified in which more than one microorganism is causing the infection.

Gram-negative bacteria multiplying in the blood release large amounts of endotoxin into the bloodstream, stimulating a massive inflammatory response mediated by a host of cytokines. This response invariably leads to a drastic drop in blood pressure, a condition called endotoxic shock. Gram-positive bacteria can instigate a similar cascade of events when fragments of their cell walls are released into the blood.