The concept of the pure culture is central to classical bacteriology, and is a central tenet of Koch’s postulates. If an organism can grow on agar, it can be streaked to obtain single colonies, each of which should have arisen as a result of a single prokaryotic cell. This works by means of the dilution effect of each round of streaking and sterilization. The first inoculum onto the plate might transport millions of bacteria to the agar but, each time the loop is dragged across the plate, these cells are removed further from their neighbors. Coupled with sterilization of the loop, fewer than 10 cells may be present in the last line of streaking before incubation.

This approach can be further enhanced by making 10-fold replicates of each dilution. This should mean that the tube with growth in, where less than three or four of the other replicates are growing, must have arisen from a single cell. This concept can be extended into a means of actually estimating the numbers in the original culture (most probable number (MPN) method). 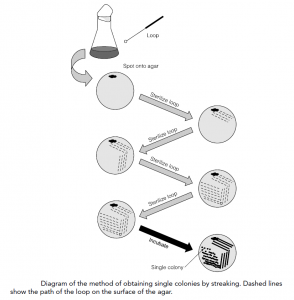 In microbiology, the number of cells per milliliter of sample is often important. We can be fairly sure of finding most species of prokaryote in a sample, provided that sample is large enough and was taken from a habitat that allows growth of that organism. It is likely that we might find Salmonella on eggs, but the important question we need to answer is ‘Are the eggs safe to eat?’ To be safe, there must be less than the intoxicating dose of Salmonella in an amount of egg that is likely to be consumed raw. The number of cells thought to cause Salmonella food poisoning is around 40, so we could reasonably expect safe eggs to carry less than, for example, 40 cells per dozen eggs. Such limits exist in industrial standards for most foods, so a good estimation of bacterial numbers is crucial to the food industry. In medicine, the presence of only one or two Staphylococcus aureus per 10 cm2 of human skin could be considered quite normal, but 104 cells per mm2 might reveal the underlying cause of a serious skin condition. In environmental microbiology the relative numbers of organisms per ml of a sample of river water might indicate the dominant species.

The numbers of prokaryotes in a sample can be expressed in two ways: the total count or the viable count. The former estimates the number of cells, alive or dead, the latter only those capable of growing under the conditions tested. Total counts are made by diluting the sample in a known amount of buffer and then counting the number of cells in each well of a hemocytometer. The hemocytometer is a specialized microscope slide and cover slip in which a grid of known size is displayed while viewing under the microscope.

The count of cells per grid can then be multiplied up to reveal the number of cells per ml in the original sample. Flow cytometry is a method, similar in concept, in which the number of particles in a small sample is electronically counted by passing a laser shining across a capillary approximately one cell wide.

More recently these methods have been complemented by quantitative PCR (qPCR). This method allows the counting of the number of copies of individual genes. For example, if the copy number per ml of the 16S rRNA gene is estimated, this can give an idea of the bacterial numbers. Although there are drawbacks to this method (we cannot be sure that all Bacteria have only one copy of this, or any other gene, per genome) we can simultaneously estimate the relative numbers of many different prokaryotes and eukaryotes by carrying out parallel experiments on the same sample using specific primer sets. Whether cells are alive or dormant can be related to the presence of ATP. Thus, an estimate can be made of the overall activity of a sample by measuring ATP (chemically). Similarly, only live cells can transcribe DNA, so an estimation of viability can be made by measuring mRNA (messenger RNA) concentrations from ribosomal genes, using reverse-transcription qPCR (RT-qPCR). This presupposes that only active cells would accumulate these transcripts.

The most commonly used and informative method for enumeration of prokaryotes is the viable count. Classically, viable counts are made by serial dilution. This agar plate-based method gives a result in colony forming units (cfu) ml–1. This is not equivalent to the true viable count, as the numbers only reflect those species that are capable of forming visible colonies under the conditions of medium and incubation chosen for the experiment. The number of cells in the original sample is estimated by back-calculating the number of dilutions made from the plate that has the highest number of easily discernible colonies. Normally this figure is less than 200 colonies per plate, but varies according to colony size. The equivalent method for prokaryotes not capable of growth on agar is the most probable number (MPN) technique, in which the pattern of growth in replicates of liquid cultures at various dilutions is used to deduce the number in the original sample.

One of the most accurate ways of counting any microscopic particle is by use of FACS (fluorescence-activated cell sorting). Fluorescent dyes can be obtained which differentially stain living and dead cells. The sample is introduced into a narrow capillary of only one cell width in diameter, and passes by a laser. The laser excites the fluorescent dye and the excitation passes to a detector. The detector is linked to a gate just downstream of the laser, which will switch to move the cell into a receptacle. Nonfluorescent cells do not cause the gate to open and pass into a second vessel. The number of times the excitation gate opens can be counted and related to the flow rate past the laser to give an exact number of cells in the sample. 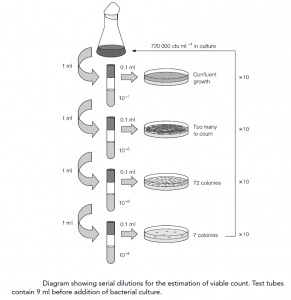