This domain is characteristic of DNA-binding proteins containing a 60-aminoacid homeodomain which is encoded by a sequence called the homeobox. In the Antennapedia transcription factor of Drosophila, this domain consists of four α -helices in which helices II and III are at right angles to each other and are separated by a characteristic β -turn. The characteristic helix–turn–helix structure is also found in bacteriophage DNA-binding proteins such as the λ phage  cro repressor, lac and trp repressors, and cAMP receptor protein, CRP. The domain binds so that one helix, known as the recognition helix, lies partly in the major groove and interacts with the DNA. The recognition helices of two homeodomain factors Bicoid and Antennapedia can be exchanged, and this swaps their DNA-binding specificities. Indeed, the specificity of this interaction is demonstrated by the observation that the exchange of only one amino acid residue swaps the DNA-binding specificities. 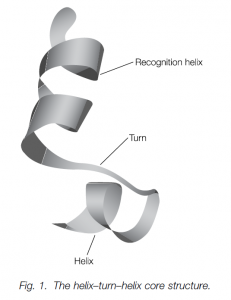 This domain exists in two forms. The C2H2 zinc finger has a loop of 12 amino acids anchored by two cysteine and two histidine residues that tetrahedrally co-ordinate a zinc ion. This motif folds into a compact structure comprising two β -strands and one α -helix, the latter binding in the major groove of DNA The α -helical region contains conserved basic amino acids which are responsible for interacting with the DNA. This structure is repeated nine times in TFIIIA, the RNA Pol III transcription factor. It is also present in transcription factor SP1 (three copies). Usually, three or more C2H2 zinc fingers are required for DNA binding. A related motif, in which the zinc ion is co-ordinated by four cysteine residues, occurs in over 100 steroid hormone receptor transcription factors. These factors consist of homo- or hetero-dimers, in which each monomer contains two C4 ‘zinc finger’motifs . The two motifs are now known to fold together into a more complex conformation stabilized by zinc, which binds to DNA by the insertion of one α -helix from each monomer into successive major grooves, in a manner reminiscent of the helix–turn–helix proteins. 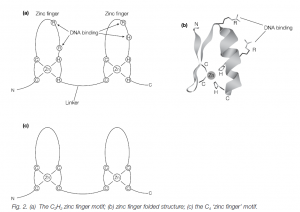 A basic domain is found in a number of DNA-binding proteins and is generally associated with one or other of two dimerization domains, the leucine zipper or the helix–loop–helix (HLH) motif. These are referred to as basic leucine zipper (bZIP) or basic HLH proteins. Dimerization of the proteins brings together two basic domains which can then interact with DNA.

Leucine zipper proteins contain a hydrophobic leucine residue at every seventh position in a region that is often at the C-terminal part of the DNA-binding domain. These leucines lie in an α -helical region and the regular repeat of these residues forms a hydrophobic surface on one side of the α -helix with a leucine every second turn of the helix. These leucines are responsible for dimerization through interactions between the hydrophobic faces of the α -helices. This interaction forms a coiled-coil structure. bZIP transcription factors contain a basic DNA-binding domain N-terminal to the leucine zipper. This is present on an α -helix which is a continuation from the leucine zipper α -helical C-terminal domain. The N-terminal basic domains of each helix form a symmetrical structure in which each basic domain lies along the DNA in opposite directions, interacting with a symmetrical DNA recognition site so that the protein in effect forms a clamp around the DNA. The leucine zipper is also used as a dimerization domain in proteins that use DNA-binding domains other than the basic domain, including some homeodomain proteins. 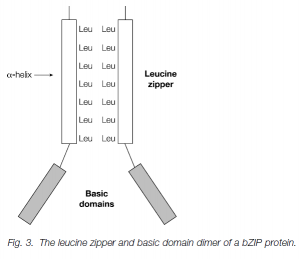 The overall structure of this domain is similar to the leucine zipper, except that a nonhelical loop of polypeptide chain separates two _-helices in each monomeric protein. Hydrophobic residues on one side of the C-terminal α -helix allow dimerization. This structure is found in the MyoD family of proteins. As with the leucine zipper, the HLH motif is often found adjacent to a basic domain that requires dimerization for DNA binding. With both basic HLH proteins and bZIP proteins the formation of heterodimers allows much greater diversity and complexity in the transcription factor repertoire.

Glutamine-rich domains were first identified in two activation regions of the transcription factor SP1. As with acidic domains, the proportion of glutamine residues seems to be more important than overall structure. Domain swap experiments between glutamine-rich transactivation regions from the diverse transcription factors SP1 and the Drosophila protein Antennapedia showed that

these domains could substitute for each other.

▶Repressor domains: Repression of transcription may occur by indirect interference with the function of an activator. This may occur by:

and activates transcription when bound to its ligand. The product of the Wilms tumor gene, WT1, is a tumor-suppressor protein having a specific proline-rich repressor domain that lacks charged residues.

It seems likely that different activation domains may have different targets, and almost any component or stage in initiation and transcription elongation could be a target for regulation resulting in multistage regulation of transcription.