▶Constitutive SP1 transcription: factors SP1– SP1 binds to a GC-rich sequence with the consensus sequence GGGCGG. It is a constitutive transcription factor whose binding site is found in the promoter of many housekeeping genes. SP1 is present in all cell types. It contains three zinc finger motifs and has been shown to contain two glutamine-rich transactivation domains. The glutamine-rich domains of SP1 have been shown to interact specifically with TAFII110, one of the TAFIIs which bind to the TATA binding protein (TBP) to make up TFIID. This represents one target through which SP1 may interact with and regulate the basal transcription complex. 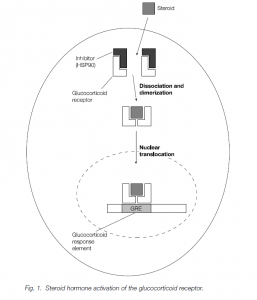 ▶Regulation by phosphorylation: STAT proteins- Many hormones do not diffuse into the cell. Instead, they bind to cell-surface receptors and pass a signal to proteins within the cell through a process called signal transduction. This process often involves protein phosphorylation. Interferon induces phosphorylation of a transcription factor called STAT1α through activation of the intracellular kinase called Janus activated kinase (JAK). When STAT1α protein is unphosphorylated, it exists as a monomer in the cell cytoplasm and has no transcriptional activity. However, when STAT1α becomes phosphorylated at a specific tyrosine residue, it is able to form a homodimer which moves from the cytoplasm into the nucleus. In the nucleus, STAT1α is able to activate the expression of target genes whose promoter regions contain a consensus DNA-binding motif.

▶Transcription elongation: HIV Tat- Human immunodeficiency virus (HIV) encodes an activator protein called Tat,which is required for productive HIV gene expression. Tat binds to an RNA stem–loop structure called TAR, which is present in the 5’-untranslated region of all HIV RNAs, just after the HIV transcription start site. The predominant effect of Tat in mammalian cells lies at the level of transcription elongation. In the absence of Tat, the HIV transcripts terminate prematurely due to poor processivity of the RNA Pol II transcription complex. Tat is thought to bind to TAR on one transcript in a complex together with cellular RNA-binding factors. This protein–RNA complex may loop backwards and interact with the new transcription initiation complex which is assembled at the promoter. This interaction is thought to result in the activation of the kinase activity of TFIIH. This leads to phosphorylation of the carboxy-terminal domain (CTD) of RNA Pol II, making the RNA polymerase a processive enzyme. As a result, the polymerase is able to read through the HIV transcription unit, leading to the productive synthesis of HIV proteins. 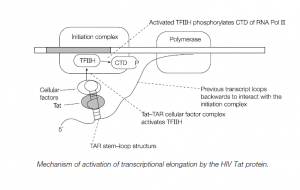 Overexpression of myoD can turn fibroblasts (cells that lay down the basement matrix in many tissues) into muscle-like cells which express muscle-specific genes and resemble myotomes. MyoD protein has been shown to activate muscle-specific gene expression directly. MyoD also activates expression of p21 waf1/cip1 expression. p21 waf1/cip1 is a small molecule inhibitor of the cyclindependent kinases (CDKs). Inhibition of CDK activity by p21 waf1/cip1 causes arrest at the G1-phase of the cell cycle. myoD expression is therefore responsible for the withdrawal from the cell cycle which is characteristic of differentiated muscle cells. There have now been shown to be four genes, myoD, myogenin, myf5 and mrf4, the expression of each of which has the ability to convert fibroblasts into muscle. The encoded proteins are all members of the helix–loop–helix (HLH) transcription factor family. MyoD is most active as a heterodimer with constitutive HLH transcription factors E12 and E47. The HLH group of proteins therefore produce a diverse range of hetero and homodimeric transcription factors that may each have different activities and roles.

These proteins are regulated by an inhibitor called Id that lacks a DNA-binding domain, but contains the HLH dimerization domain. Therefore, Id protein can bind to MyoD and related proteins, but the resulting heterodimers cannot bind DNA, and hence cannot regulate transcription. 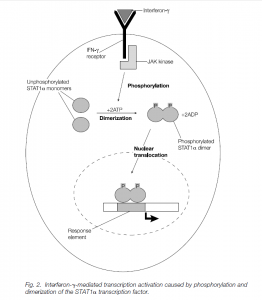 ▶Embryonic development: homeodomain proteins- The homeobox is a conserved DNA sequence which encodes the helix–turn–helix DNA binding protein structure called the homeodomain. The homeodomain was first discovered in the transcription factors encoded by homeotic genes of Drosophila. Homeotic genes are responsible for the correct specification of body parts. For example, mutation of one of these genes, Antennapedia, causes the fly to form a leg where the antenna should be. These genes are very important in spatial pattern formation in the embryo. The homeobox sequence has been conserved between a wide range of eukaryotes and homeobox-containing genes have been shown to be important in mammalian development. In Drosophila and mammals, the homeobox genes are arranged in gene clusters in which homologous genes are in the same order. The gene homologs are also expressed in a similar order in the embryo on the anterior to posterior axis. This suggests that the conserved homeobox-encoded DNA-binding domain is characteristic of transcription factors which have a conserved function in embryonic development.