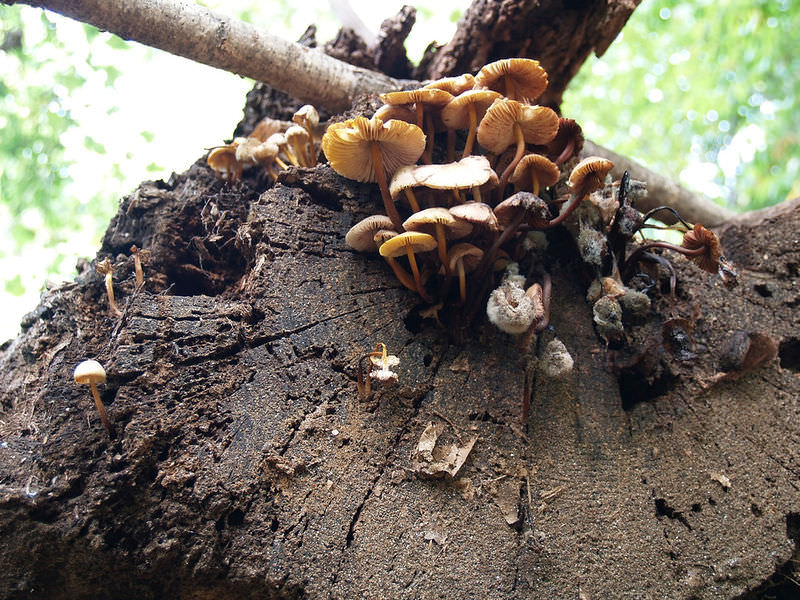 Carbohydrates must enter hyphae in a soluble form because the rigid cell wall prevents endocytosis. Soluble sugars cross the fungal wall by diffusion, followed by active uptake across the fungal membrane. This type of nutrition is seen in the symbiotic and some parasitic fungi. For the saprophytic fungi most carbon in the environment is not in a soluble form but is present as a complex polymer like cellulose, chitin or lignin. These polymers have to be broken down enzymically before they can be utilized. Fungi release degradative enzymes into their environments. Different classes of enzyme can be produced, including the cellulases, chitinases, proteases, and multi-component lignin-degrading enzymes, depending on the type of substrate the fungus is growing on. Regulation of these enzymes is by substrate induction and end-product inhibition.

Once within the hypha, carbon and energy metabolism is by the processes of glycolysis and the citric acid cycle. Fungi are usually aerobic, but some species, for example the yeasts, are capable of living in low oxygen tension environments and utilizing fermentative pathways of metabolism. Recently, truly anaerobic fungi have been discovered within animal rumen and in anaerobic sewage-sludge digesters.

Fungi are heterotrophic for nitrogen. They cannot fix gaseous nitrogen, but they can utilize nitrate, ammonia, and some amino acids by direct uptake across the hyphal membrane. Complex nitrogen sources, such as peptides and proteins, can be utilized after extracellular proteases have degraded them into amino acids. Macronutrients, micronutrients, and growth factors Phosphorus, potassium, magnesium, calcium, and sulfur are all macronutrients required by fungi. All but phosphorus are usually available to excess in the fungal environment. Phosphorus can sometimes be in short supply, particularly in soils, and fungi have the ability to produce extracellular phosphatase enzymes which allow them to access otherwise unavailable phosphate stores.

Micronutrients include copper, manganese, sodium, zinc, and molybdenum, all of which are usually available to excess in the environment. Iron is relatively insoluble and therefore not easily assimilated, but fungi can produce siderophores or organic acids, which can chelate or alter iron solubility and improve its availability. Some fungi may require preformed vitamins, for example, thiamin and biotin. Other requirements can be for sterols, riboflavin, nicotinic acid, and folic acid.

Fungi require water for nutrient uptake and they are therefore restricted to fairly moist environments such as host tissue if they are parasites or symbionts, or soils and damp substrates if they are saprophytes. Desiccation causes death unless the fungus is specialized, as they are in the lichens. Some fungi are wholly aquatic. Fungi tend to occupy acidic environments, and by their metabolic activity (respiration and organic acid secretion) tend to further acidify them. They grow optimally at pH 4–6. Most fungi are mesophilic, growing at between 5° and 40°C. Some are psychrophilic and are able to grow at under 5°C, others are thermotolerant or thermophilic and can grow at over 50°C.

Nutrient depletion, competition or other types of metabolic stress that limit fungal growth promote the formation and secretion of secondary metabolites. These compounds can be produced by many different metabolic pathways and include compounds termed antibiotics (active against bacteria, protista, and other fungi), plant hormones (gibberellic acid and indoleacetic acid – IAA), and cytotoxic and cytostimulatory compounds.