In the past the fungi were a polyphyletic group that contained microorganisms that had very different ancestors. Current thinking now prefers a monophyletic classification where all groups within a phylum are descendants of one ancesto.

Fungal taxonomy is currently undergoing a comprehensive review based on molecular data and phylogenetic analysis. The fungi currently contain around 70 000 described species, with an estimated 1.5 to 4 million fungi as yet undescribed. They are now considered to be a member of the eukaryotic crown, evolving about a billion years ago as a sister clade to the Animals.

The original classification of the fungi into four major phyla based largely on form groups is now being replaced with a classification that includes one sub-kingdom, the Dikarya, which contains the phyla the Ascomycota and Basidiomycota. These are fungi with complex mycelium with elaborate, perforate septa and a complex life cycle that includes a phase where a pair of unfused nuclei exist together in one cell (the dikaryon). Up to seven other phyla are proposed, including the Glomeromycota, and the Zygomycota, fungi with nonseptate mycelium, asexual sporangiospores, and sexual zygospores (grouped together in the Zygomycetes in the old system) and three phyla containing the fungi with motile spores, the Blastocladiomycota, Chytridiomycota, and Neocallimastigomycota. This group is loosely termed the chytrids.

However, it seems that neither the Zygomycota nor the Chytridiomycota are monophyletic and the phyla may yet be deconstructed as data accumulate. Two chytrids in particular illustrate the difficulty in developing a classification for this group. Rozella is an intracellular parasite of other chytrid fungi with an extremely reduced thallus, which appears to have diverged very early from the main fungal branch. From recent molecular data it appears to be a sister group to the Microsporidia, until very recently considered to be a member of the animal kingdom. Olpidium, a fungus with a growth habit very like that of Rozella as an intracellular parasite, appears to have evolved a lot later than most of the chytrids and may be closer to the Zygomycetes.

A more startling change is the inclusion of the microsporidia in the fungi. These are obligate, highly specialized intracellular parasites, about 1300 described species, infecting animals, humans, insects, and fish. Originally described as schizomycete fungi, then placed at the base of the eukaryote tree, as amitochondrial primitive species, molecular data now find them within the fungal branch of the eukaryotic tree. Within each of the major phyla are several classes of fungi, indicated by names ending with -etes, and within classes can be subclasses or orders, indicated by names ending in -ales, within which there are genera and then species. The important differences between fungi used to distinguish taxonomic groups are summarized in Table . 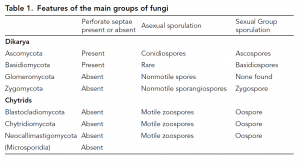 Fungi are filamentous, non photosynthetic, eukaryotic microorganisms that have a heterotrophic nutrition. Their basic cellular unit is described as a hypha. This is a tubular compartment that is surrounded by a rigid, chitin-containing wall. The hypha extends by tip growth, and multiplies by branching, creating a fine network called a mycelium. Hyphae contain nuclei, mitochondria, ribosomes, Golgi, and membrane- bound vesicles within a plasma membrane-bound cytoplasm. The subcellular structures are supported and organized by microtubules and endoplasmic reticulum (ER). The cytoplasmic contents of the hypha tend to be concentrated towards the growing tip. Older parts of the hypha are heavily vacuolated and may be separated from the younger areas by cross walls called septae. Not all fungi are multicellular, some are unicellular and are termed yeasts. These grow by binary fission or budding. 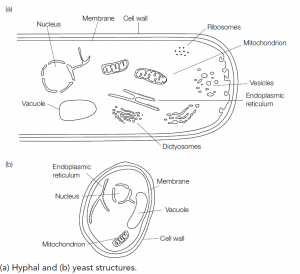 Fungal walls are rigid structures formed from layers of semi-crystalline chitin microfibrils that are embedded in an amorphous matrix of b 1–3 and b 1–6 glucan. Some protein may also be present. Growth occurs at the hyphal tip by the fusion of membrane-bound vesicles containing wall-softening enzymes, cell wall monomers, and cell wall polymerizing enzymes derived from the Golgi with the hyphal tip membrane. The fungal wall is softened, extended by turgor pressure, and then rigidified. Septae are cross walls that form within the mycelium. Growth in the Zygomycota and Chytridiomycota is not accompanied by septum formation, and the mycelium is coenocytic. Septae only occur in these groups to delimit reproductive structures from the parent mycelium, and they are complete. In the dikarya growth of the mycelium is accompanied by the formation of incomplete septae. Septae in the Ascomycota are perforate, and covered by ER membranes to limit movement of large organelles such as nuclei from compartment to compartment. This structure is called the dolipore septum. 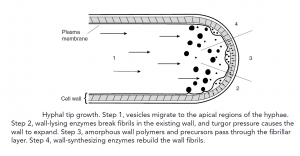 Hyphal tip growth allows fungi to extend into new regions from a point source or inoculum. Older parts of the hyphae are often emptied of contents as the cytoplasm is taken forwards with the growing tip. This creates the radiating colonial pattern seen on agar plates, in ringworm infections of skin, and in fairy rings on grass lawns.

When fungi are filamentous their growth rate cannot be established by cell counting using a hemocytometer or by turbidometric measurements (which can be used to measure bacterial and yeast growth). However, by measuring mass (M) changes with time (t) under excess nutrient conditions the specific growth rate (m) for the culture can be calculated using the formula:

Fungal growth in a given medium follows the growth phases of lag, acceleration, exponential, linear, retardation, stationary, and decline. Exponential growth occurs only for a brief period as hyphae branches are initiated, and then the new hypha extends at a linear rate into uncolonized regions of substrate. Only hyphal tips contribute to extension growth. However, older hyphae can grow aerially or differentiate to produce sporing structures. 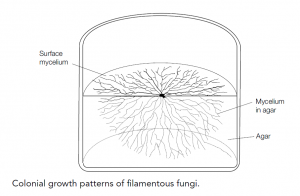 In most fungi the hyphal growth unit includes the tip compartment plus two or three subapical compartments. The ratio increases exponentially from germination, but stabilizes to give a constant figure for a particular strain under any given set of environmental conditions.

The peripheral growth zone is the region of mycelium behind the tip, needed to support maximum growth of the hyphal tip. This zone permits radial extension at a rate equal to that of the specific growth rate of unicells in liquid culture. The mean rate of hyphal extension (E) is a function of the hyphal growth unit and the specific growth rate (μ):