Measuring the expression of most or all of the genes in a biological system raises major analytic challenges. Analytical methods may be used to examine mRNA expression levels or differential mRNA expression. Some examples of these techniques are listed below.

Classical karyotyping uses dyes that differentially stain the chromosomes. Thus, each chromosome is identified by its banding pattern. However, traditional banding techniques are limited to the identification of large and relatively simple changes.

In situ hybridization is the most sensitive and specific means of identifying the location of genes on chromosomes. In addition, using chromosome- and genespecific probes, numerical and structural aberrations can be analyzed within individual cells. Thus, in situ hybridization has applications in the diagnosis of genetic disease and in the identification of gene deletions, translocations, and amplification. FISH techniques are proving highly successful in the identification of chromosomal alterations which could not be resolved by traditional approaches.

Fluorescence in Situ Hybridization (FISH) is used in the Analysis of Genes and Chromosomes. Fluorescence in situ hybridization is the most direct way of determining the linear order of genes on chromosomes. By using chromosomeand gene-specific probes, numerical and structural aberrations can also be analyzed within individual cells.

These techniques have a wide variety of applications in the diagnosis of genetic disease and the identification of gene deletions, translocations, and amplifications during cancer development. Nucleic acid probes are labeled nonisotopically by the incorporation of nucleotides modified with molecules such as biotin or digoxigenin. After hybridization of the labeled probes to the chromosomes, detection of the hybridized sequences is achieved by forming antibody complexes that recognize the biotin or digoxigenin within the probe. The hybridization is visualized by using antibodies conjugated to fluorochromes.

The fluorescent signal can be detected in a number of ways. If the signal is strong enough, standard fluorescence microscopy can be used. However, data analysis and storage can be improved considerably by the use of digital imaging systems such as confocal laser scanning microscopy or cooled CCD camera. The major advantages of fluorescence in situ hybridization (FISH) are that it is nonisotopic, radioactivity is not required, it is rapid, amenable to computerized storage and manipulation, sensitive, gives accurate signal localization, allows simultaneous analysis of two or more fluorochromes, and provides a quantitative and spatial distribution of the signal.

Chromosomal painting: A technique has been developed that allows investigators to differentiate all of our chromosomes very quickly and accurately by seeing them painted in different fluorescent colors. This technique allows a scientist or clinician to determine quickly whether any chromosomal anomalies exist, either in number (aneuploidy) or structure (deletions, translocations). The technique, chromosomal painting, is a variant of the technique known as fluorescent in situ hybridization (FISH), in which a fluorescent dye is attached to a nucleotide probe that then binds to a specific site on a chromosome and makes itself visible by fluorescence. A whole chromosome can be made visible by this technique if enough probes are available to mark enough of the chromosome. However, there are not enough fluorescent markers known to paint all 24 of our chromosomes (autosomes 1– 22, X, Y) a different color. Now, with as few as five different fluorescent markers and enough probes to coat each chromosome, it is possible to make combinations of the different marker dyes so that each chromosome fluoresces a different color. Because the colors are not generally distinguishable by the human eye, they have to be separated by a computer that then assigns each chromosome its own color. The technique works very well. With it, we can rapidly determine any chromosomal anomaly in a given cell. This technique is helpful in clinical diagnosis of various syndromes and diseases, including cancer 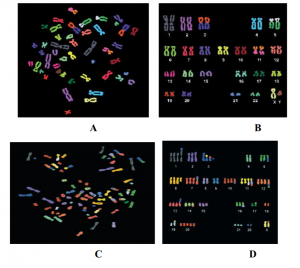 Figure Chromosomal spreads after treating with probes specific for all human chromosomes and attached to fluorescent tags. Colors are generated by computer. Left (a, b) are the spread and karyotype of a normal cell; right (c, d) are the same for an ovarian cancer cell with complex chromosomal anomalies.

Traditional FISH analysis has employed, at most, two colors of detection, red-fluorescing fluorochromes and green-fluorescing fluorochromes. The improvements in fluorescent imaging and development of heartier fluorochromes/dyes have enabled investigators to use several different DNA probes in one experiment. This may involve all or combinations of locus-specific probes and chromosome paints. The value of such experiments lies in the investigator obtaining far more information from one specific cell at one time, rather than carrying out separate experiments on multiple specimens prepared from the same sample, then extrapolating results.

For both assays, the experimental procedures are identical: commercially available probes for all 24 (human) chromosomes are differentially labeled according to a labeling scheme and hybridized to metaphase spreads for 24 to 48 hr, followed by post-hybridization washes and, if required, antibody detection.

Furthermore, visualization of the resulting fluorescence patterns by computer programs makes these techniques more sensitive than the human eye. These techniques are proving to be highly successful in the identification of new chromosomal alterations that were previously unresolved by traditional approaches 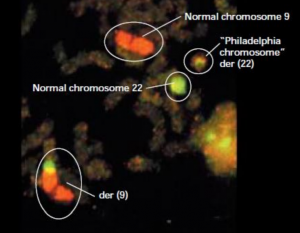 Genomic in situhybridization (GISH) involves the extraction of DNA from one organism, labeling this in some way so that it can be detected later in situ by a fluorescent dye, and using this as a probe to target cells from another organism prepared using normal cytological squash methods. Those parts of the chromosomes of the target organism that is sufficiently similar to the probe material from probe target complexes which are labeled by the fluorescent dye. Other parts not forming such a complex do not become fluorescent but can be counter stained with a dye of contrasting color.

Early attempts to identify individual chromosomes or genome in cell had to rely on morphology alone, using overall size and the position of the various markers such as centromeres and secondary constrictions. The development of chromosomes bending technique around 1970 represented a tremendous advance, since many more sites can be recognized within a genome, and often each chromosome has a unique pattern of bands.

The first in situ hybridization (ISH) studies developed in the late 1960 and 1970 differed from GISH in that the probes were of small specific regions of the genome and labeling was radioactive. They were effectively a controlled variant of chromosome banding, in which the molecular nature of the labeled bands or regions was at least potentially known. The substitution in the 1980 of fluorescence for radio activity in fluorescent in situ hybridization (FISH) was an advance over ISH partly because the technique is quicker, Safe and cheaper and also because the results can be polychromatic and have a higher resolution. GISH can be considered a further advance over FISH, because in the former whole chromosomes become labeled.

GISH is the highly advanced in many studies like as genome identification and meiotic analysis. Gish is also applicable to cells at interphase as well as those undergoing cell division. GISH was originally developed for animal hybrid cell lines and first used on plants in 1987 at the plant breeding institute, Cambridge.

Use of genomic in situ hybridization:

The uses to which GISH has been put may be placed in four major categories.