Thus gene expression in eukaryotes may be regulate at following levels –

Regulation At The Level Of Genome

(a) Z-DNA & its role in regulation– Z-DNA is left handed and formed when the untwisting of DNA cause negative super coiling which would be left handed. Under such circumstances it might be expected that transcription would then be allowed to proceed more rapidly. Mutations in virus that prevent Z-DNA forming also inhibit multiplication of virus.

(b) DNA methylation– Inactive DNA sequence is heavily methylated than that of transcribing sequence. In some cases gene activation has been shown to be associated with removal of methyl groups.

Regulation At The Level Of DNA Replication

(b) Gene Destruction – Gene destruction Occurs in some organism as a loss of a chromosome or a chromosome part. Whole chromosome is routinely lost from master. So it also participates in gene regulation.

Regulation At The Level Of Transcription

There are two types of promoter related control-

The binding of regulation protein to the promoter is essential for initiation of transcription. It’s called positive regulation. A good example of Negative requlation is presented by a gene of histone H2B in sea urchin. The promoter of this H2B gene has two CAAT Boxes to which two molecule of the CAAT binding factor attach ; this is essential to allow the transcription to be initiate. However in tissue other than testes, the embryonic tissue, the CAAT boxes are occupied by molecule of a CAAT displacement factor. As a result, the CAAT binding factor and the RNA polymerase are unable to bind to the H2B promoter and transcription of this gene is prevented.

(b). The Enhancer sequence

Many promoters have their activity modulated by an enhancer. The enhancer may be situated upstream, downstream or even within the gene which is being transcribed. Enhancer elements have been identified in gene regulated by steroid hormone. When the hormone receptor complex attaches at the enhancer site, the transcription process is greatly increased

Generally, prior to cell division, most chromatin is in condensed form. Between cell division, the bulk of the chromatin in most cells is well dispersed within the nucleus. It has long been felt that the more compact (super coiled) heterochromatin is probably transcriptional silent and that loosing of chromatin structure may permit transcription and perhaps even regulated. Following evidences support this idea-

Britin and Devidson (1973) proposed gene battery model. This model proposed that the eukaryotic genome contain a large number of sensor sites which recognize various signalling agents. The Signalling agents may induce hormone receptor complexes or substrates of specific enzyme, An Important feature of  Briton and Devidson model is that the structural genes make up a small part of the large genome and much of the DNA function in regulation in the form of sensor,    integrator & receptor loci.

The model consists of four classes of sequences. 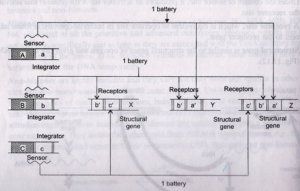 In case the end product of a biosynthesis pathway is not utilized. It accumulates inside the cell and stops the further synthesis of that product. This called as feedback inhibition of the gene action. The inhibition is caused by the binding of accumulated end product. E.g. UMBARGER (1961) has demonstrated that isoleucin synthesis from E. coli can be inhibited, if some Isoleucin is added to the medium. By the binding of Isoleucin to the enzyme, the enzyme is inactive. This phenomenon of inhibition to the enzyme is known as allosteric interaction.

Gene GCN4 (gene for general control of nitrogen metabolism) in yeast has been found regulated primarily at translation level. Konzak (1983) proposed a hypothesis for translation in eukaryotes. According to which, a 40s subunit of ribosome along with methionine tRNA moves down the MRNA from 5’ end until is finds out first AUG, so that 60s subunit Join and translation begin. This hypothesis is applicable very cleary to mRNA of GCN4 of yeast. This mRNA has 577 nucleotides long un-translated sequence at 5 end and it has AUG codons upstream of the real AUG Codon. Each false codon is followed by a termination codon. Experimental studies have shown that if the starting 250 codons which includes false AUG codons are deleted, a greatly increased rate of translation is found. Such an increase suggests that these false AUG codons limit or regulate the translation.

Polyproteins are polypeptides which contain repeated sequence of smaller polypeptides. A Singlal polyprotein contain more than one separate polypepide. e.g. the gene for polyprotein propiomelanocortion (POMC) codes for several proteins functions. POMC shows tissue- specific processing. In the anterior lobe of pituitary it is first cleaved to yield an N- terminal fragment and c terminal β lipoprotein. The N terminal fragment is further cleaved to release the ACTH hormone. On the other hand, in the intermediate lobe of the pituitary gland the ACTH and β Lipoprotein are processed further. The ACTH is cleaved to yield a malanotropin (a-MSH) While the β Lipoprotein is further cut to produce β endorphin. Thus a single gene may give rise to different functional polypeptides in different tissues due to a variation in the protein processing. In general polyproteins are cleaved to yield functional proteins of < 40 amino acid each.

RNAi have a more widespread and unanticipated role in gene regulation in Eukaryotes. This is new mode of gene regulation. Several types of very short RNAs repress of silence expression of genes with homology to those short RNAs. This Silencing called RNAi (RNA interference). Some times by inhibiting translation of the mRNA, and in yet others by transcriptional silencing of the promoter that directs expression of that mRNA. These short RNA are generated by special enzymes from longer double stranded RNAs (dsRNAs) of various origins. [The small RNAs have different names depending on their origin. Those made artificially or produced in vivo from dsRNA precursors are typically called small interference (SiRNA). Another group of regulatory RNAs are the micro RNAs (MiRNAs)]

These small RNA inhibit expression of homologous target genes in three ways they trigger destruction of the mRNA encoded by the target gene. They inhibit translation of the mRNA or they induce chromatin modification within the target gene and there by silence its transcription. In this process one complex ‘RISK’ which contains SiRNA & MiRNA, Various proteins including a membrane of the Argonaut family.

The SiRNA of MiRNA must be denatured to give a guide RNA. The strand that gives the RISK specificity and passenger RNA, usually gets discarded. The resulting complex, the mature RISK is then directed to target RNAs Containing sequences complementary to the guide RNA. These target RNAs are degraded or their translation is inhibited. Typically the choice depends in part on how closely the guide RNA matches the target mRNA. If the sequence is highly complementary the target is degraded; if the match is not as good (there are several base pairing mismatches) the response is more often inhibition of translation. In those cases where the target RNA is degraded, Argonaut is the catalytic subunit the carriers out the initial mRNA cleavage, for this reason Argonaut is often called ‘slicer’ and mRNA cleavage is called slicing