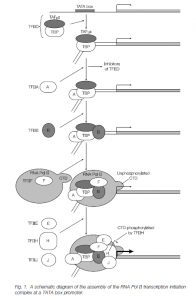 ▶TFIID: In promoters containing a TATA box, the RNA Pol II transcription factor TFIID is responsible for binding to this key promoter element. The binding of TFIID to the TATA box is the earliest stage in the formation of the RNA Pol II transcription initiation complex. TFIID is a multiprotein complex in which only one polypeptide, TATA-binding protein (TBP) binds to the TATA box. The complex also contains other polypeptides known as TBP-associated factors (TAFIIs). It seems that in mammalian cells, TBP binds to the TATA box and is then joined by at least eight TAFIIs to form TFIID.

▶TBP: TBP is present in all three eukaryotic transcription complexes (in SL1, TFIIIB and TFIID) and clearly plays a major role in transcription initiation. TBP is a monomeric protein. All eukaryotic TBPs analyzed have very highly conserved C-terminal domains of 180 residues and this conserved domain functions as well as the full-length protein in in vivo transcription. The function of the less conserved N-terminal domain is therefore not fully understood. TBP has been shown to have a saddle structure with an overall dyad symmetry, but the two halves of the molecule are not identical. TBP interacts with DNA in the minor groove so that the inside of the saddle binds to DNA at the TATA box and the outside surface of the protein is available for interactions with other protein factors. Binding of TBP deforms the DNA so that it is bent into the inside of the saddle and unwound. This results in a kink of about 45° between the first two and last two base pairs of the 8 bp TATA element. A TBP with a mutation in its TATA box-binding domain retains its function for transcription by RNA Pol I and Pol III, but it inhibits transcription initiation by RNA Pol II. This indicates that the other two polymerases use TBP to initiate transcription, but the precise role of TBP in these complexes remains unclear.

▶TFIIA:  TFIIA binds to TFIID and enhances TFIID binding to the TATA box, stabilizing the TFIID–DNA complex. TFIIA is made up of at least three subunits. In in vitro transcription studies, as TFIID is purified, the requirement for TFIIA is lost. In the intact cell, TFIIA appears to counteract the effects of inhibitory factors such as DR1 and DR2 with which TFIID is associated. It seems likely that TFIIA binding to TFIID prevents binding of these inhibitors and allows the assembly process to continue.

▶Factors binding after RNA polymerase: After RNA polymerase binding, three other transcription factors, TFIIE, TFIIH and TFIIJ, rapidly associate with the complex. These proteins are necessary for transcription in vitro and associate with the complex in a defined order. TFIIH is a large complex which is made up of at least five subunits. TFIIJ remains to be fully characterized.

▶The initiator transcription complex: Many RNA Pol II promoters which do not contain a TATA box have an initiator element overlapping their start site. It seems that at these promoters TBP is recruited to the promoter by a further DNA-binding protein which binds to the initiator element. TBP then recruits the other transcription factors and RNA polymerase in a manner similar to that which occurs in TATA box promoters.

▶TFIID: TFIID binds to the TATA box. It is a multiprotein complex of the TATA binding protein (TBP) and multiple accessory factors which are called TBP associated factors or TAFIIs.

▶TBP: TBP is a transcription factor required for transcription initiation by all three RNA polymerases. It has a saddle structure which binds to the minor groove of the DNA at the TATA box, unwinding the DNA and introducing a 45° bend.

▶CTD phosphorylation by TFIIH: TFIIH phosphorylates the carboxy-terminal domain (CTD) of RNA Pol II. This results in formation of a processive polymerase complex.