Transformation is the process whereby cell free or naked DNA containing a limited amount of genetic information is transferred from one bacterial cell to another. The DNA is obtained from the donor cell by natural cell lysis or by chemical extraction. Donor DNA passes into recipient through the cell wall and cell membrane of the recipient cell. DNA having molecular weight from 3,00,000 to 8 million daltons is most suitable for transformation. Once DNA enters into a cell, it integrates into chromosome of recipient cell. One strand is degraded by deoxyribonucleases while other strand undergoes base pairing with a homologous part of the recipient cell chromosome and then becomes integrated into the recipient DNA (Fig. 9.8).

Bacterial transformation was first discovered by F. Griffith (1928) during his investigations of pneumococcal infections in mice. He had found that in Streptococcus pneumonia, virulence to mice was related to the presence of a capsular material and the absence of capsule made the bacteria avirulent. The wild type strain is surrounded by a polysaccharide capsule and forms a colony with a smooth (s) surface. This strain is pathogenic (virulent) and causes severe infection of pneumonia, A mutant strain does not have the capsule and it forms a colony with a rough (R) surface. The mutant (R) strain is non-pathogenic (avirulent). Griffith’s experiments involved the infection of mice with heat killed and living preparations from two strains of Streptococcus pneumoniae. Injection of avirulent mutant ‘R’ bacteria or heat killed virulent ‘S’ bacteria did not cause any harm to mice.

Injection of a mixture of the two bacterial types [R and S (heat-killed)] killed some mice and live, virulent ‘S’ bacteria recovered from these animals (Fig. 9.9). The strain ‘R’ type acquired the ability to produce capsules and become virulent. This induction in change of ‘R’ strain was called transformation. Griffith thought that the transferring agent was a protein.

Avery, Macleod and McCarty (1944) showed that the substance responsible for transformation was DNA. Their studies with purified DNA from the smooth (S) cells and its ability to transform rough cells in a test tube explained the observations made by Griffith. From this experiment, it was concluded that the heat killed capsulated cells carried the information for the synthesis of the capsule which was transferred to the live non-capsulated cells. Transformation has now been demonstrated in Streptococcus, Bacillus, Escherichia, Neisseria, Hemophilus, Salmonella, 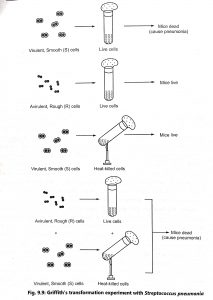