A number of agents that infect the blood and lymphatics cause extreme fevers, some of which are accompanied by internal hemorrhaging. The diseases are grouped into the category of “hemorrhagic fevers” and are covered in this section. The following section deals with diseases in which the main symptom is fever—without the hemorrhagic part. All hemorrhagic fever diseases described here are caused by viruses in one of three families: Arenaviridae, Filoviridae, and Flaviviridae. Bunyaviridae is a fourth family with members that cause hemorrhagic fevers, but we do not discuss examples of these here. All of these viruses are RNA enveloped viruses, the distribution of which is restricted to their natural host’s distribution. 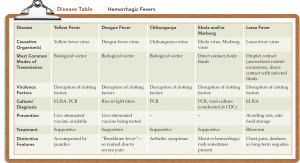