The sample is collected from a patient’s nose or mouth. The nasopharyngeal swab is used to collect secretions that contain viruses. The swab is then transferred to the sterile container containing a viral transport medium.

Real-time RT–PCR is a nuclear-derived method is used for the detection of specific genetic material in any pathogen including virus.

It is a severe respiratory disease, most common symptoms include fever, cough and shortness of breath.

How RT PCR is conducted?

Viral RNA has to be extracted to carry on the process of RT-PCR.

(The elution buffer removes the viral RNA from this spin column)

Preparation of the reaction mixture for PCR amplification

After the first cycle, the double-stranded DNA target is obtained. Then again cycle two is performed where the same denaturation annealing and extension steps are repeated

With more number of cycles, more probes are cleaved increasing the intensity of the fluorescence which also confirms the amount of amplification

The fluorophore signals can be detected by CCD cameras and can be observed in computers showing positive results of Corona. 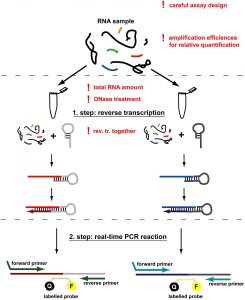