How Innate and Adaptive Immunity is Related? 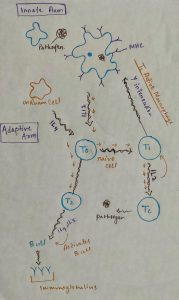 Suppose an antigen enters or it is caught by an antigen-presenting cell (APCs) like macrophage. Macrophage catch the antigen and destroys it then it represents the part of antigen on its surface and at the same time it moves toward lymph nodes to represent this antigen to other immune cells which helps in forming memory cells