Assisted Reproductive Technology (ART) in humans in one of the greatest advances in the reproduction of humans. When the union between sperm and egg cell occurs outside the body in a culture vessel by maintaining optimum conditions artificially, it is known as in-vitro fertilization. This involves collection of ovum from females and sperms from males and their fusion under appropriate conditions in-vitro, The resulting zygotes may be cultured in- vitro to obtain young embryos, which are implanted in the uterus of healthy females which act as foster mother or surrogate mothers. This technique is called as embryo transplantation. In-vitro fertilization and embryo transfer are being applied to animals for a rapid multiplication of desirable genotypes of animals and in cases of infertility of certain types in humans. 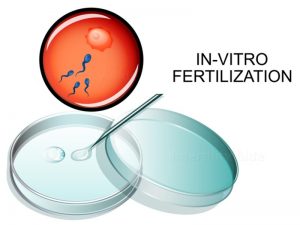 There is a large number of reasons for developing infertilites in humans. Total count of sperms should be 15 to 20 million per ml in fertile human. When the number of sperms decreases, the person is called oligospermic and the condition as oligospermia. Infertility may be because of total lack or very low concentration of motile sperm. This type of male is called azoospermic and the phenomenon as azoospermia. There are several reasons and types of female infertility.

Tubal infertility: This occurs due to non-functional or damaged fallopian tubes. In-vitro fertilization followed by embryo transfer in uterus has replaced the function of fallopian tubes.

Non-functional or inaccessible ovaries: Some women, possess ovaries that are non-functional or in some cases the ovaries may be totally absent These females may serve as surrogate mothers. The oocyte has to be obtained from a donor woman and in-vitro fertilized with the husband’s sperm.

Non-functional or absent uterus: In some woman, the uterus may be absent or non-functional. In such a case, the oocytes of these women can be fertilized by the husband’s sperms and then embryo is transferred into the uterus of surrogate mother for pregnancy and further development.

Human artificial insernination is used as assisted reproductive technology primarily to treat infertility. It is mainly used to enable women without a male partner (single women and lesbians) to become pregnant and to produce children by using sperm provided by a sperm donor. In this case, the woman is the genetic and gestational mother of the child, and the sperm donor is the genetic or biological father of the child.

In intra-uterine insemination (IUI), the sperm must immediately be “washed in laboratory and a chemical is added to the sample. The process of “washing” the sperm increases the chances of fertilization and removes any chemicals in the semen that may cause discomfort for the woman. If sperm is provided by a sperm donor through a sperm bank, it is frozen and quarantined for a particular period. The donor is tested before and after production of the sample to ensure that he does not carry a transmissible disease, Sperm samples donated in this method are produced through masturbation by the sperm donor at the sperm bank. Cryoprotectant is added in the sperm to aid the freezing and thawing process. Some chemicals may be added which separate the most active sperm in the sample as well as extending or diluting the sample so that vials for a number of inseminations are produced.

A woman’s menstrual cycle is closely observed, by tracking basal body temperature (BBT) and changes in vaginal mucous or using ovulation kits, ultrasounds or blood tests. When an ovum is released, semen provided by the woman’s partner or by a donor is inserted into the female’s vagina or uterus. Semen is occasionally inserted twice within a ‘treatment cycle’. A pregnancy resulting from artificial insemination is no different from any other pregnancy. The easiest way to inseminate is by intracervical insemination (ICI), where semen is injected high into the cervix with a needle-less syringe. This process most closely replicates the way in which semen is deposited by the penis in the cervix when the male ejaculates during vaginal intercourse. However, more technical procedures may be used which increase the chances of conception. Semen from which certain chemicals have been removed (washed semen) can be injected directly into a woman’s uterus in a process called intrauterine insemination (IUI). If the semen is not washed it may elicit uterine cramping, expelling the semen and causing pain, because it content prostaglandins. Intrauterine insemination can be combined with intratubal insemination (ITI), into the Fallopian tube.

Artificial insemination has become a significant issue in recent years, particularly in debates revolving around same sex parenting, single mother parenting and surrogate parenting. Legal issues have arisen in cases where the gestational (and possibly genetic) mother decides to keep the child. Likewise, there have been debates over the rights and obligations of sperm donors.

In-vitro fertilization and embryo transfer is aimed to enable couples suffering from certain types of sterility to have children to their own. This technique deals with the removal of eggs from a women, fertilizing them in the laboratory and then transferring the fertilized eggs (zygotes) into the uterus of women. The different steps involved in the technique are:

Oocytes for in-vitro fertilization are collected from the female, who is interested for child. The sterility of female is due to the absence of ovaries, then the oocytes are collected from donor females. Oocytes are collected at right time of development by monitoring the stimulation of ovary. There are many parameters which are used as indicators for stimulation of ovary that includes rise in the level of luteinising hormone (LH) either in urine or in blood, rise in temperature of body during preovulatory and postovulatory days, changes in cervical mucus and estimation of progesterone and oestrogen. Controlled ovarian hyperstimulation (COH) technique is used in in-vitro fertilization for development of more embryos. The specific drug regimes are used to induce superovulation such as clomiphene citrate (CC), human menopausal gonadotrophin (hMG), follicle stimulating hormone (FSH),CC+ hMG, CC + FSH etc. Oocytes are recovered by the most convenient and efficient equipment called laproscopy. The follicles are observed by using microscopic equipment and aspirated with the aspirating apparatus. The aspirating apparatus inserted into the abdomen of the female via a suitable tube for collection of oocytes. The oocytes are identified and incubated for 5 to 10 hours depending on maturity of oocytes and follicles. Whittingham’s T6 medium, Earl’s solution, modified Whitten’s medium or modified Ham’s F10 medium is used for oocyte culture and in-vitro fertilization.

(i) Collection of sperms:

In-vitro fertilization is performed by adding 10,000 to 50,000 motile sperms in 1 ml of culture medium containing oocytes. The oocytes are examined after 12 to 13 hours for the number of pronuclei and polar bodies, and granulation and shape of the oocyte. A normally fertilized oocyte (zygote) contains two pronuclei and two polar bodies. The abnormal fertilized oocyte contains more than two pronuclei and granulation in cytoplasm. The abnormal embryo is discarded and only normal embryo is used for implantation.

In-vitro fertilized embryos of 1 to 16 cells have been successfully transferred into uterus but the best stage is 2 to 4 cell stage. A prolonged in-vitro culture of embryos reduces their survival rate while younger embryos are sensitive to uterine environment. The success rate may increases by transferring multiple embryos but it may lead to multiple pregnancy. The embryo is transferred into uterus through cervical canal with the help of a Teflon catheter along with 10 ml of tissue culture medium. Embryo transfer must be performed with extreme care to avoid fallopian tube pregnancy or expulsion or embryo from uterine cavity. It is necessary that the female receiving the embryo must be in the correct stage of her menstrual cycle and the female is allowed to take rest for about 5 to 7 hours. Sometimes, a surrogate mother may used for the embryo transfer.

The bodies produced by using this in-vitro fertilization approach are known as test tube babies. The first test tube baby Loise Brown was born in UK on 28th July, 1978. This technique is widely used in all over world to provide the joy of having their own babies to couples suffering infertility. However, many religious, ethical, emotional, social or political issues related to this development may need resolution. Some communities do not approve in-vitro fertilization techniques. Some countries believe the sperm donation as immoral. Children born of donated sperms are considered illegitimate. About unused embryos has an emotional problem. Whether this embryos implanted in surrogate mothers or thrown away. For children born through donated egg or sperm, its social or religious recognition, biological parents and acceptance from the parents are the major issues in in-vitro fertilization technology.