The replication cycle of influenza virus is rather short (about 6-8 h) being focused in the nucleus of infected cells.

Viral attachment is promoted by interaction of hemagglutinin with cell-surface sialic acid. For successful binding hemagglutinin should be activated by local proteolysis with host enzymes localized in upper respiratory tract.

Receptor-mediated endocytosis provides virion internalization. After fusion of viral envelope with the cell membrane the uncoating activates. Acidification of the endosome compartment via M2 protein channells accelerates viral nucleoprotein release into the cytoplasm.

At the first step of viral genomic RNA replication the positive-strand RNA copy is formed. The reaction is catalyzed by virus-encoded RNA polymerase. Positive strand serves as the template for subsequent protein synthesis. All of the genomic segments are sequentially transcribed. Two of newly appeared transcripts undergo splicing.

Hemagglutinin and neuraminidase are produced in the cell endoplasmic reticulum. Then they are transported to the cell membrane for subsequent insertion.

Nucleocapsids are assembled in the host cell nucleus and transferred to the cell membrane. They interact with hemagglutinin and neuraminidase that facilitates budding.

Budding process accomplishes the maturation of nascent viruses and results in massive egress of progeny virions that rapidly infect the neighbouring cells.

Because of short replication cycle, about 1000 virions are multiplied from 1 viral particle in first 8 h, and enormous number of 1027 virions arises to the end of the first day of the infection. This ensures the rapid onset and acute course of influenza. 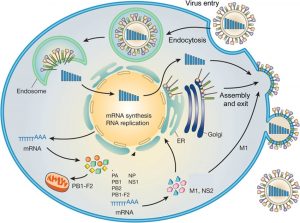