Rod-shaped bacteria with massive capsules – causative agents of severe pneumonia cases – were primarily described by the German bacteriologist E. Klebs in 1875. They were further isolated in pure culture by the German pathologist C. Friedlander in 1882, and the pathogen was named Klebsiella pneumoniae.

Structure and Properties of K. pneumoniae

Differentiation of klebsiellae is based on a number of biochemical tests. 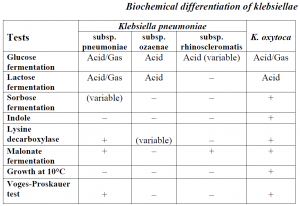 Pathogenesis and Clinical Findings in Klebsielloses

The cases of ozaena and rhinoscleroma were sometimes registered on the territory of Belarus.

Treatment and Prophylaxis of Klebsielloses