▶Protein complexes: Cellular architecture contains many large complexes of the different classes of macromolecules with themselves or with each other. Many of the major structural and locomotory elements of the cell consist of protein complexes. The cytoskeleton is an array of protein filaments which organizes the shape and motion of cells and the intracellular distribution of subcellular organelles. Microtubules are long polymers of tubulin, a 110 kiloDalton (kDa) globular protein. These are a major component of the cytoskeleton and of eukaryotic cilia and flagella, the hair-like structures on the surface of many cells which whip to move the cell or to move fluid across the cell surface. Cilia also contain the proteins nexin and dynein.

Microfilaments consisting of the protein actin form contractile assemblies with the protein myosin to cause cytoplasmic motion. Actin and myosin are also major components of muscle fibers. The intermediate filaments of the cytoskeleton contain a variety of proteins including keratin and have various functions, including strengthening cell structures. In all cases, the energy for motion is provided by the coupled hydrolysis of ATP or guanosine 5’-triphosphate (GTP). 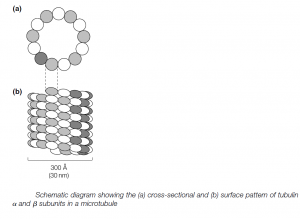 ▶Nucleoprotein: Nucleoproteins comprise both nucleic acid and protein. Ribosomes are large cytoplasmic ribonucleoprotein complexes which are the sites of protein synthesis. Bacterial 70S ribosomes have large (50S) and small (30S) subunits with a total mass of 2.5 X 106 Da. (The S value, e.g. 50S, is the numerical value of the sedimentation coefficient, s, and describes the rate at which a macromolecule or particle sediments in a centrifugal field. It is determined by both the mass and shape of the molecule or particle; hence S values are not additive.) The 50S subunit contains 23S and 5S RNA molecules and 31 different proteins while the 30S subunit contains a 16S RNA molecule and 21 proteins. Eukaryotic 80S ribosomes have 60S (with 28S, 5.8S and 5S RNAs) and 40S (with 18S RNA) subunits. Under the correct conditions, mixtures of the rRNAs and proteins will self-assemble in a precise order into functional ribosomes in vitro. Thus, all the information for ribosome structure is inherent in the structures of the components. The RNAs are not simply frameworks for the assembly of the ribosomal proteins, but participate in both the binding of the messenger RNA and in the catalysis of peptide bond synthesis.

Chromatin is the material from which eukaryotic chromosomes are made. It is a deoxyribonucleoprotein complex made up of roughly equal amounts of DNA and small, basic proteins called histones. These form a repeating unit called a nucleosome. Correct assembly of nucleosomes and manyother protein complexes requires assembly proteins, or chaperones. Histones neutralize the repulsion between the negative charges of the DNA sugar phosphate backbone and allow the DNA to be tightly packaged within the chromosomes. Viruses are another example of nucleoprotein complexes.

▶Membranes: When placed in an aqueous environment, phospholipids and sphingolipids naturally form a lipid bilayer with the polar groups on the outside and the nonpolar hydrocarbon chains on the inside. This is the structural basis of all biological membranes. Such membranes form cellular and organellar boundaries and are selectively permeable to uncharged molecules. The precise lipid composition varies from cell to cell and from organelle to organelle. Proteins are also a major component of cell membranes. Peripheral membrane proteins are loosely bound to the outer surface or are anchored via a lipid or glycosyl phosphatidylinositol anchor and are relatively easy to remove. Integral membrane proteins are embedded in the membrane and cannot be removed without destroying the membrane. Some protrude from the outer or inner surface of the membrane while transmembrane proteins span the bilayer completely and have both extracellular and intracellular domains. The transmembrane regions of these proteins contain predominantly hydrophobic amino acids. Membrane proteins have a variety of functions, for example: 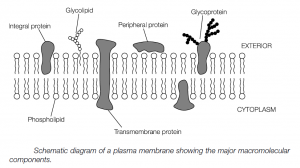 ▶Noncovalent interactions: Most macromolecular assemblies are held together by a large number of different noncovalent interactions. Charge–charge interactions (salt bridges) operate between ionizable groups of opposite charge at physiological pH, for example between the negative phosphates of DNA and the positive lysine and arginine side chains of DNA-binding proteins such as histones.

Charge–dipole and dipole–dipole interactions are weaker and form when either or both of the participants is a dipole due to the asymmetric distribution of charge in the molecule. Even uncharged groups like methyl groups can attract each other weakly through transient dipoles arising from the motion of their electrons (dispersion forces).

Noncovalent associations between electrically neutral molecules are known collectively as vander Waals forces. Hydrogen bonds are of great importance. They form between a covalently bonded hydrogen atom on a donor group (e.g. –O-H or –N-H) and a pair of nonbonding electrons on an acceptor group (e.g.:O=C– or :N–). Hydrogen bonds and other interactions involving dipoles are directional in character and so help define macromolecular shapes and the specificity of molecular interactions. The presence of uncharged and nonpolar substances, for example lipids, in an aqueous environment tends to force a highly ordered structure on the surrounding water molecules. This is energetically unfavorable as it reduces the entropy of the system. Hence, nonpolar molecules tend to clump together, reducing the overall surface area exposed to water. This attraction is termed a hydrophobic (water-hating) interaction and is a major stabilizing force in protein–protein and protein–lipid interactions and in nucleic acids. 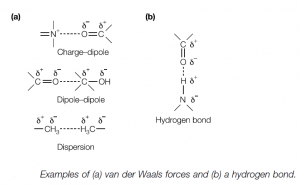