In the 1970s, an enigmatic cluster of arthritis cases appeared in the town of Old Lyme, Connecticut. The phenomenon caught the attention of non professionals and professionals alike, whose persistence and detective work ultimately disclosed the unusual nature and epidemiology of Lyme disease.

The process of discovery began in the home of Polly Murray, who, along with her family, was beset for years by recurrent bouts of a stiff neck, swollen joints, malaise, and fatigue that seemed vaguely to follow a rash from tick bites. When Mrs Murray’s son was diagnosed as having juvenile rheumatoid arthritis, she became sceptical. Conducting her own literature research, she began to discover inconsistencies. Rheumatoid arthritis was described as a rare, non-infectious disease, yet over an 8-year period, she found that 30 of her neighbours had experienced similar illnesses.

Ultimately, this cluster of cases and others were reported to state health authorities. Eventually, Lyme disease was shown to be caused by Borrelia burgdorferi. It is now recognized that Lyme disease has been around for centuries.

Lyme disease is nonfatal, but it often evolves into a slowly progressive syndrome that mimics neuromuscular and rheumatoid conditions. An early symptom in 70% of cases is a rash at the site of a tick bite. The lesion, called erythema migrans, looks something like a bull’s-eye, with a raised erythematous (reddish) ring that gradually spreads outward and a pale central region. Other early symptoms are fever, headache, stiff neck, and dizziness. If not treated or if treated too late, the disease can advance to the second stage, during which cardiac and neurological symptoms, such as facial palsy, can develop. After several weeks or months, a crippling polyarthritis can attack joints. Some people acquire chronic neurological complications that are severely disabling.

Borrelia burgdorferi was discovered in 1981 by Dr Willy Burgdorfer, although he did not realize at that time its connection with disease. Borrelia is spirochetes, but they are morphologically distinct from other pathogenic spirochetes. They are comparatively larger, ranging from 0.2 to 0.5 micrometre in width and from 10 to 20 micrometres in length, and they contain 3 to 10 irregularly spaced and loose coils. The nutritional requirements of Borrelia are so complex that the bacterium can be grown in artificial media only with difficulty. 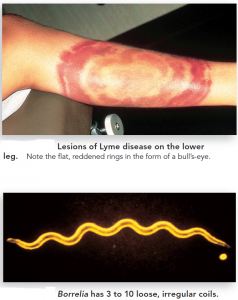 The bacterium is a master of immune evasion. It changes its surface antigens while it is in the tick and again after it has been transmitted to a mammalian host. It provokes a strong humoral and cellular immune response, but this response is mainly ineffective, perhaps because of the bacterium’s ability to switch its antigens. Indeed, it is possible that the immune response contributes to the pathology of the infection. B. burgdorferi also has multiple proteins for attachment to host cells; these are considered virulence factors as well.

B. burgdorferi is transmitted primarily by hard ticks of the genus Ixodes. In the northeastern part of the United States, Ixodes scapularis (the black-legged deer tick) passes through a complex 2-year cycle that involves two principal hosts. As a larva or nymph, it feeds on either the white-footed mouse or birds or raccoons, where it picks up the infectious agent. The nymph is relatively nonspecific and will try to feed on nearly any type of vertebrate—thus, it is the form most likely to bite humans.

The adult tick reproductive phase of the cycle is completed on deer. In California, the transmission cycle involves Ixodes pacificus, another black-legged tick, and the dusky-footed woodrat as a reservoir. The incidence of Lyme disease showed a gradual upward trend from about 10,000 cases per year in 1991 to 27,000 in 2007. This increase may be partly due to improved diagnosis, but it also reflects changes in the numbers of hosts and vectors. The greatest concentrations of Lyme disease are found in areas having a high deer population.

Most of the cases have occurred in New York, Pennsylvania, Connecticut, New Jersey, Rhode Island, and Maryland, but the numbers in the Midwest and West are growing. Highest risk groups include hikers, backpackers, and people living in newly developed communities near woodlands and forests. 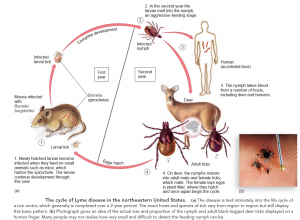 Diagnosis of Lyme disease can be difficult because of the range of symptoms it presents. Most suggestive are the ring-shaped lesions, isolation of spirochetes from the patient, and serological testing with an ELISA method that tracks a rising antibody titer. Tests for spirochetal DNA in specimens is especially helpful for late-stage diagnosis. 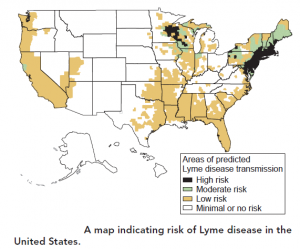 A vaccine for Lyme disease was available for a brief period of time, but it was withdrawn from the market in early 2002. Other vaccines are in development. Because dogs can also acquire the disease, there is a vaccine for them. Anyone involved in outdoor activities should wear protective clothing, boots, leggings, and insect repellant containing DEET.1 Individual exposed to heavy infestation should routinely inspect their bodies for ticks and remove ticks gently without crushing, preferably with forceps or fingers protected with gloves, because it is possible to become infected by tick faeces or body fluids. Early, prolonged (3 to 4 weeks) treatment with doxycycline and amoxicillin is effective, and other antibiotics such as ceftriaxone and penicillin are used in late Lyme disease therapy. 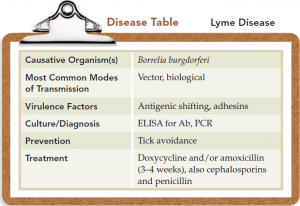