▶Proteins and nucleic acids: Proteins are polymers of amino acids linked together by peptide bonds. Proteins have both structural and functional roles. The nucleic acids DNA and RNA are polymers of nucleotides, which themselves consist of a nitrogenous base, a pentose sugar and phosphoric acid. There are three main types of cellular RNA: messenger RNA (mRNA), ribosomal RNA (rRNA) and transfer RNA (tRNA). Nucleic acids are involved in the storage and processing of genetic information, but the expression of this information requires proteins.

▶Polysaccharides: Polysaccharides are polymers of simple sugars covalently linked by glycosidic bonds. They function mainly as nutritional sugar stores and as structural materials. Cellulose and starch are abundant components of plants. Both are glucose polymers, but differ in the way the glucose monomers are linked. Cellulose is a linear polymer with β (1-> 4) linkages and is a major structural component of the plant cell wall. About 40 parallel chains form horizontal sheets which stack vertically above one another.

The chains and sheets are held together by hydrogen bonds to produce tough, insoluble fibers. Starch is a sugar store and is found in large intracellular granules which can be hydrolyzed quickly to release glucose for metabolism. It contains two components: α -amylose, a linear polymer with α (1-> 4) linkages, and amylopectin, a branched polymer with additional α (1-> 6) linkages. With up to 106 glucose residues, amylopectins are among the largest molecules known. The different linkages in starch produce a coiled conformation that cannot pack tightly, hence starch is water-soluble.

Fungi and some animal tissues (e.g. liver and muscle) store glucose as glycogen, a branched polymer like amylopectin. Chitin is found in fungal cell walls and in the exoskeleton of insects and crustacea. It is similar to cellulose, but the monomer unit is N-acetylglucosamine. Mucopolysaccharides (glycosaminoglycans) form the gel-like solutions in which the fibrous proteins of connective tissue are embedded. Determination of the structures of large polysaccharides is complicated because they are heterogeneous in size and composition and because they cannot be studied genetically like nucleic acids and proteins.

▶Lipids: While individual lipids are not strictly macromolecules, many are built up from smaller monomeric units and they are involved in many macromolecular assemblies. Large lipid molecules are predominantly hydrocarbon in nature and are poorly soluble in water. Some are involved in the storage and transport of energy while others are key components of membranes, protective coats and other cell structures. Glycerides have one, two or three long-chain fatty acids esterified to a molecule of glycerol.

In animal triglycerides, the fatty acids have no double bonds (saturated) so the chains are linear, the molecules can pack tightly and the resulting fats are solid. Plant oils contain unsaturated fatty acids with one or more double bonds. The angled structures of these chains prevent close packing so they tend to be liquids at room temperature. Membranes contain phospholipids, which consist of glycerol esterified to two fatty acids and phosphoric acid. The phosphate is also usually esterified to a small molecule such as serine, ethanolamine, inositol or choline. Membranes also contain sphingolipids such as ceramide, in which the long chain amino alcohol sphingosine has a fatty acid linked by an amide bond. Attachment of phosphocholine to a ceramide produces sphingomyelin.

▶Complex macromolecules: Many macromolecules contain covalent or noncovalent associations of more than one of the major classes of large biomolecules. This can greatly increase the functionality or structural capabilities of the resulting complex. For example, nearly all enzymes are proteins, but some have a noncovalently attached RNA component which is essential for catalytic activity. Associations of nucleic acid and protein are known as nucleoproteins. Examples are telomerase, which is responsible for replicating the ends of eukaryotic chromosomes and E3) and ribonuclease P, an enzyme which matures transfer RNA (tRNA). In telomerase, the RNA acts as a template for telomere DNA synthesis, while in ribonuclease P, the RNA contains the catalytic site of the enzyme. Ribonuclease P is an example of a ribozyme. 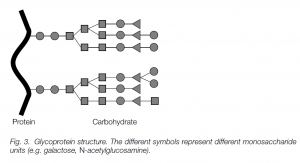 Glycoproteins contain both protein and carbohydrate (between <1% and > 90% of the weight) components; glycosylation is the commonest form of post-translational modification of proteins. The carbohydrate is always covalently attached to the surface of the protein, never the interior, and is often variable in composition, causing microheterogeneity. This has made glycoproteins difficult to study. Glycoproteins have functions that span the entire range of protein activities, and are usually found extracellularly. They are important components of cell membranes and mediate cell–cell recognition.

Proteoglycans (mucoproteins) are large complexes (>107 Da) of protein and mucopolysaccharide found in bacterial cell walls and in the extracellular space in connective tissue. Their sugar units often have sulfate groups, which makes them highly hydrated. This, coupled with their lengths (> 1000 units), produces solutions of high viscosity. Proteoglycans act as lubricants and shock absorbers in extracellular spaces.

Lipid-linked proteins have a covalently attached lipid component. This is usually a fatty acyl (e.g. myristoyl or palmitoyl) or isoprenoid (e.g. farnesyl or geranylgeranyl) group. These groups serve to anchor the proteins in membranes through hydrophobic interactions with the membrane lipids and also promote protein–protein associations.

In lipoproteins, the lipids and proteins are linked noncovalently. Because lipids are poorly soluble in water, they are transported in the blood as lipoproteins. These are basically particles of triglycerides and cholesterol esters coated with a layer of phospholipids, cholesterol and protein (the apolipoproteins). The structures of the apolipoproteins are such that their hydrophobic amino acids face towards the lipid interior of the particles while the charged and polar amino acids face outwards into the aqueous environment. This renders the particles soluble.

Glycolipids, which include cerebrosides and gangliosides, have covalently linked lipid and carbohydrate components, and are especially abundant in the membranes of brain and nerve cells.