Throughout human history, including prehistoric times, malaria has been one of the greatest afflictions, in the same rank as bubonic plague, influenza, and tuberculosis. Even now, as the dominant protozoan disease, it threatens 40% of the world’s population every year. The origin of the name is from the Italian words mal, bad, and aria, air. The superstitions of the Middle Ages alleged that evil spirits or mists and vapors arising from swamps caused malaria, because many victims came down with the disease after this sort of exposure. We now know that a swamp was mainly involved as a habitat for the mosquito vector.

After a 10- to 16-day incubation period, the first symptoms are malaise, fatigue, vague aches, and nausea with or without diarrhea, followed by bouts of chills, fever, and sweating. These symptoms occur at 48- or 72-hour intervals, as a result of the synchronous rupturing of red blood cells. The interval, length, and regularity of symptoms reflect the type of malaria.

Patients with falciparum malaria, the most virulent type, often manifest persistent fever, cough, and weakness for weeks without relief. Complications of malaria are hemolytic anemia from lysed blood cells and organ enlargement and rupture due to cellular debris that accumulates in the spleen, liver, and kidneys. One of the most serious complications of falciparum malaria is termed cerebral malaria.

In this condition, small blood vessels in the brain become obstructed due to the increased ability of red blood cells (RBCs) to adhere to vessel walls (a condition called cytoadherence induced by the infecting protozoan). The resulting decrease in oxygen in brain tissue can result in coma and death. In general, malaria has the highest death rate in the acute phase, especially in children. Certain kinds of malaria are subject to relapses because some infected liver cells harbor dormant protozoans for up to 5 years. 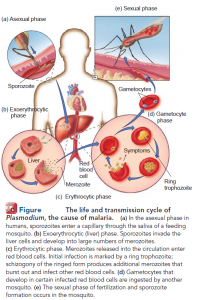 Plasmodium species are protozoans in the sporozoan group. They are apicomplexans, which live in animal hosts and lack locomotor organelles in the mature state. Apicomplexans alternate between

sexual and asexual phases, often in different animal hosts. The genus Plasmodium contains four species: P. malariae, P. vivax, P. falciparum, and P. ovale. Humans are the primary vertebrate hosts for most of the species. The four species show variations in the pattern and severity of disease. Development of the malarial parasite is divided into two distinct phases: the asexual phase, carried out in the human, and the sexual phase, carried out in the mosquito. The asexual phase (and infection) begins when an infected female Anopheles mosquito injects saliva containing anticoagulant into a capillary in preparation for taking a blood meal. In the process, she inoculates the blood with

motile, spindle-shaped asexual cells called sporozoites (Gr. sporo, seed, and zoon, animal). The sporozoites circulate through the body and migrate to the liver in a short time. Within liver cells, the sporozoites undergo asexual division called schizogony (Gr. schizo, to divide, and gone, seed), which generates numerous daughter parasites, or merozoites. This phase of pre-erythrocytic development lasts from 5 to 16 days, depending upon the species of Plasmodium. Its end is marked by eruption of the liver cell, which releases from 2,000 to 40,000 mature merozoites into the circulation.

During the erythrocytic phase, merozoites attach to special receptors on RBCs and invade them, converting in a short time to circular (ring-shaped) trophozoites. This stage feeds upon hemoglobin, grows, and undergoes multiple divisions to produce a cell called a schizont, which is filled with more merozoitesBursting RBCs liberate merozoites to infect more red cells. Eventually, certain merozoites differentiate into two types of specialized gametes called macrogametocytes (female) and microgametoctyes (male). Because the human does not provide a suitable environment for the next phase of development, this is the end of the cycle in humans.

The sexual phase (sporogony) occurs when a mosquito draws infected red blood cells into her stomach. In the stomach, the microgametocyte releases spermlike gametes that fertilize the larger macrogametocytes. The resultant diploid cell (ookinete) implants into the stomach wall of the mosquito, becoming an oocyst, which undergoes multiple mitotic divisions, ultimately releasing sporozoites that migrate to the salivary glands and lodge there. This event completes the sexual cycle and makes the sporozoites available for infecting the next victim. 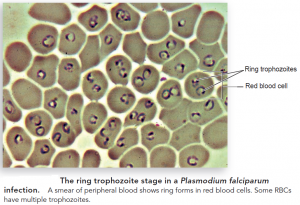 The invasion of the merozoites into RBCs leads to the release of fever-inducing chemicals into the bloodstream. Chills and fevers often occur in a cyclic pattern. Plasmodium also metabolizes glucose at a very high rate, leading to hypoglycemia in the human host. The damage to RBCs results in anemia. The accumulation of malarial products in the liver and the immune stimulation in the spleen can lead to enlargement of these organs.

The inducement of RBC adhesion to blood vessels in the brain (cytoadherence) adds to its virulence. A surface protein called GPI (glycosyl-phosphatidyl inositol) is thought to be responsible for the fever seen in malaria. P. vivax and P. ovale have a propensity to persist in the liver; and without sufficient treatment, they can reemerge over the course of several years to cause recurrent bouts of malarial symptoms. The fact that the protozoan has several different life stages within a host helps it escape immune responses mounted against any single life stage.

All forms of malaria are spread primarily by the female Anopheles mosquito and occasionally by shared hypodermic needles and blood transfusions. Although malaria was once distributed throughout most of the world, the control of mosquitoes in temperate areas has successfully restricted it mostly to a belt extending around the equator. Despite this achievement, approximately 300 million to 500 million new cases are still reported each year, about 90% of them in Africa. The most frequent victims are children and young adults, of whom at least 2 million die annually. A particular form of the malarial protozoan causes damage to the placenta in pregnant women, leading to excess mortality among fetuses and newborns. The total case rate in the United States is about 1,000 to 2,000 new cases a year, most of which occur in immigrants.

Malaria can be diagnosed definitively by the discovery of a typical stage of Plasmodium in stained blood smears . Newer serological procedures have made diagnosis more accurate while requiring less skill to perform. Other indications are knowledge of the patient’s residence or travel in endemic areas and symptoms such as recurring chills, fever, and sweating.

World health officials have tried for decades to eradicate malaria. The most recent attempt is by the United Nations– backed Global Malaria Action Plan, which hopes to cut malaria by 75% between 2000 and 2015, and to reduce the number of malaria deaths to zero. Their final goal is to eradicate malaria altogether. Malaria prevention is attempted through long-term mosquito abatement and human chemoprophylaxis.

Abatement includes elimination of standing water that could serve as a breeding site and spraying of insecticides to reduce populations of adult mosquitoes, especially in and near human dwellings. Scientists have also tried introducing sterile male mosquitoes into endemic areas in an attempt to decrease mosquito populations. Humans can reduce their risk of infection considerably by using netting, screens, and repellants; by remaining indoors at night; and by taking weekly doses of prophylactic drugs. (Western travelers to endemic areas are often prescribed antimalarials for the duration of their trips.) People with a recent history of malaria must be excluded from blood donations.

The WHO and other international organizations focus on efforts to distribute bed nets and to teach people how to dip the nets twice a year into an insecticide. The use of bed nets has been estimated to reduce childhood mortality from malaria by 20%. Here is an area where we can report some success: Bed-net use has tripled in 16 of 20 sub-Saharan African countries since 2000.

Even with massive efforts undertaken by the WHO, the prevalence of malaria in endemic areas is still high. The best protection would come from a malaria vaccine, and scientists have struggled for decades to develop one. A successful malaria vaccine must be capable of striking adiverse and rapidly changing target. Scientists estimate that the parasite has 5,300 different antigens. Despite these odds, one vaccine has reached human trials. It is called RTS,S and contains a molecule expressed by the parasite as it enters the human in mosquito saliva.

Another vaccine in the human trial stage targets the liver form of the parasite. Eventually the two may be combined to provide good protection against the disease. As with other mosquito-borne diseases, scientists are also constantly investigating mosquito control measures, which can have unintended consequence. Another potentially powerful strategy is the use of interfering RNAs in the mosquitoes to render them resistant to Plasmodium infection.

Quinine has long been a mainstay of malaria treatment. It is a compound originally found in the bark of the cinchona tree, which grows in the Andes, but is now synthesized in various forms. Quinine is an ingredient in tonic water; for that reason tonic water was popularized among 19thcentury British colonists in India who believed that the tonic water could protect them from malaria. (In reality, the concentration of quinine is too low to be of medicinal use.) Chloroquine, the least toxic type, is used in non resistant forms of the disease.

In areas of the world where resistant strains of P. falciparum and P. vivax predominate, a course of mefloquine or pyrimethamine plus sulfadoxine (Fansidar) may be indicated, but more commonly artemisinin, another plant compound, has been most effective. Predictably, artemisinin resistance has been found in Cambodia. The World Health Organization now recommends only administering artemisinin in combination with other antimalarials, in order to prevent resistance development. 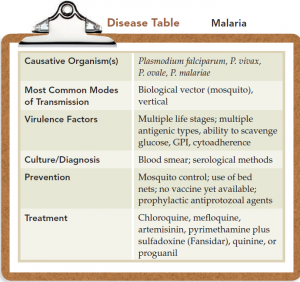