Matthew Meselson and Franklin Stahl (1957) provided the experimental support for Watson’s and Crick’s model for DNA replication which is called Meselson-Stahl experiment. They grow E. coli cells for many generations in a medium containing heavy isotopic nitrogen (15N) and this cell contains 15N – labelled DNA. The DNA isolated from these cells had a density of about 1% greater than that of normal (14N) DNA [Fig. 8.3 (a)]. The mixture of heavy (15N) and light (14N) DNA can be separated by centrifugation to equilibrium in a caesium chloride (CsCl) density gradient.

The cells grown in the 15N medium were transferred to a fresh medium containing less dense isotopic nitrogen (14N) and was allowed to multiply several times. In the first generation, DNA was extracted which was found to be hybrid of 15N –14N(Fig. 8.3 (b)]. This strand was lighter than 15N and heavier than 14N. The DNA bands were formed at a specific position in the density gradient. The cells were again allowed to double in number in the 14N medium. The isolated DNA product of the second generation exhibited two bands [Fig. 8.3 (c)] in the density gradient (light DNA and hybrid DNA). This was the semi-conservative nature of DNA. 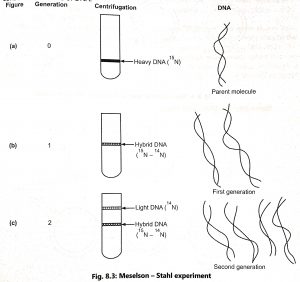