A key stage of converting the primary genetic information from the stable DNA code into protein is to translate the messenger RNA (mRNA) into a polypeptide. This process is carried out by the ribosome. The ribosome can only bind to messenger RNA, at sites to the 5’ of the AUG start codon. Confusion often arises over the location of the promoter, the ribosome binding site (RBS), and the transcript start site, as these are often all marked on schematics showing the features of a gene in its genomic location.

A common misconception about prokaryotes is that they are unable to perform any processing on their RNA, a false distinction often drawn between them and the eukaryotes. Although transcript processing is less common in prokaryotes, it still does occur. There is evidence that some bacterial transcripts have short poly-A tails added, and there is evidence of intron/exon-like processing in a very few genes. The Archaea possess many of the transcript processing features associated with eukaryotes, including extensive intron/exon structures, but neither the Bacteria nor the Archaea rely heavily on mRNA splicing to generate protein diversity. Instead they rely on population diversity to cope with environmental change.

One function in which extensive RNA processing is always present in Bacteria is in the manufacture of the ribosomal RNA. In Escherichia coli there are seven different operons for ribosomal RNA (rrn operons), scattered throughout the genome. The number, amount of duplication, location, and order of the genes within these operons varies in different species. At the E. coli K12 rrnA genomic locus the 16S rRNA gene (rrsA) is separated from the 23S rRNA gene (rrlA) by genes coding transfer RNA (ileT and alaT). Downstream of alaT at the end of the operon is the gene for 5S rRNA (rrfA).

The operon is transcribed as a single polycistronic RNA of about 5000 nucleotides but is quickly processed by RNase III, plus other site-specific RNA-hydrolyzing enzymes called M5, M16, M23, and M25, and begins just as the unprocessed RNA emerges from the RNA polymerase, i.e. the 5’ end of the operon is processed before the 3’.

The immature rrn transcript can form stable secondary structures made up of stems of RNA:RNA complementary duplexes, and loops of single-stranded RNA. The structure allows the protein to bind to the rRNA, initially to form a ribonucleoprotein (RNP) complex.Some of these proteins remain to become part of the mature ribosome, but some are lost as 24  base-specific methylations of the rRNA take place. It is also at this stage that the first RNase III stage of maturation occurs. Further processing of the precursors by M5, M16, and M23 RNases generates three ribosomal RNA species, named 16S, 23S, and 5S.

The ‘S’ stands for Svedberg units and refers to the sedimentation coefficient – an older measure of molecular weight and size. With the advent of sequencing, the sizes of the rrn genes are equally well known, 16S being 1541 bp, 23S 2904 bp, and the smallest 5S is only 119 bp in E. coli. 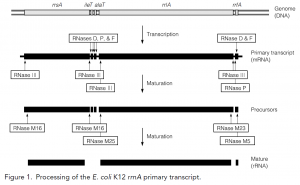 The Bacterial and Archaeal ribosomes resemble eukaryotic ribosomes in many respects.The prokaryotes lack any compartmentalization of the processes involved, in contrast to the many membranous structures the eukaryotes have evolved. Key differences between the prokaryotes and the eukaryotes are listed in Table . Prokaryotic ribosomes move around in the cytoplasm freely, much as those in the eukaryotic mitochondrion do. The actual mechanism by which mRNA is translated into the polypeptide is very similar in all organisms.

In Bacteria it has been observed from electron micrographs that transcription and translation are tightly coupled, with translation beginning as soon as a nascent mRNA emerges from the RNA polymerase complex. This is in marked contrast to eukaryotes, where mRNA must first pass through the nuclear membrane before translation can occur, and in many cases mRNA is targeted towards particular organelles. In Bacteria, as soon as an RBS emerges from an RNA polymerase during mRNA synthesis, a ribosome binds and begins translation. As more mRNA is synthesized the ribosome moves down the codons until there is enough room for another ribosome to bind at the RBS. By the time the RNA polymerase has completed synthesis of mRNA, many ribosomes will be attached, each with a partially completed polypeptide. This multiribosome-, mRNA-, and RNA polymerase-containing structure is sometimes called the polysome. The proximity of the RNA polymerase and ribosome plays an important role in the regulation of some genes. In an organism growing quickly on a readily available carbon and energy source, the polysome may also be spatially very close to the replisome, and the interplay between the two is the source of speculation with regard to regulatory mechanisms.