All species of the Archaeplastida and many species of the excavates and chromalveolates are photosynthetic and therefore gain carbon and energy from the fixation of atmospheric or dissolved carbon dioxide using photosynthesis. The photosynthetic reactions take place in the chloroplasts, the light reactions occurring in the chloroplast thylakoids, and the light-independent reactions occurring in the stroma. The chlorophyll pigments are membrane-bound within the thylakoids, and their properties include the ability to be excited by light. Different chlorophylls accept light energy of different wavelengths, depending on their structure. Accessory pigments, the carotenoids, phycobilins, and xanthophylls, also absorb light energy of different wavelengths and pass their excitation to chlorophyll, maximizing the breadth of wavelength over which light energy can be absorbed. The role of accessory pigments is particularly important as they allow photosynthetic organisms to occupy different parts of the photic zone, the shallow layer of water where sufficient light penetrates to support photosynthesis. The actual depth to which light will penetrate varies with turbidity and dissolved organic matter content. Furthermore, the light of different wavelengths penetrates water to different degrees. Red light is absorbed rapidly by water, blue light least. The members of the green algae occupy only the shallowest of waters.

Chlorophylls a, b, and c are the photosynthetic pigments, with chlorophyll a being the primary photosynthetic pigment. The absorption maxima of chlorophyll a are at 430 and 663 nm. Other chlorophylls are accessory pigments and have slightly different absorption maxima: chlorophyll b at 435 and 645 nm, chlorophyll c1 at 440, 583, and 634nm, and c2 at 452, 586, and 635 nm. Phycobilins absorb light energy at 565 nm. There are also other accessory pigments found in the different algal groups, the carotenes and xanthophylls. Depending on the different accessory pigments present in individual species, the light of different wavelengths can be absorbed and utilized in photosynthesis. Nutrient uptake in nonphotosynthetic excavates and chromalveolates may be by diffusion, pinocytosis, or phagocytosis. Within nutrient-rich tissues, such as those that intracellular parasites or blood-dwelling parasites live in, nutrient uptake is by diffusion and pinocytosis, the formation and digestion of small vesicles from the plasma membrane. These vesicles capture soluble nutrients from the environment. In most larger, free-living species, particulate organic matter and bacteria are engulfed by phagocytosis. In this process, large vacuoles can form anywhere over the cell surface in the amebae, or from specialized sites such as the cytostome in ciliates and flagellates.

Digestion of the vesicle content occurs by the fusion of lysozyme-containing enzyme vesicles with the phagocytic vesicles. Once digestion is complete enzymes are recycled by the cell and sequestered into small vesicles, while cell debris is expelled from the cell by reverse phagocytosis, where the food vacuole re-fuses with the plasma membrane. A large number of symbiotic species can be found in the excavates and chromalveolates in association with many different photosynthetic symbionts. Species of Alveolates and Euglenoids with these symbionts have autotrophic nutrition, relying on photosynthetic products for carbon and energy source. In some cases, the cytostome seen in non-photosynthetic protistans is not present. Further evidence of the close taxonomic relationships between the photosynthetic and nonphotosynthetic groups is provided by the fact that it is possible to ‘cure’ some species of their symbionts, and once cured, these protista return to their holozoic nutrition and form food vesicles from a reformed cytostome.

Anaerobic species have a fermentative metabolism, which results in the incomplete oxidation of substrates. A few species that live in anaerobic lake sediments can use alternative electron acceptors such as nitrate. There are several modifications to the usual glycolytic pathway found in some members of the excavates and chromalveolates. Some can utilize inorganic pyrophosphate rather than ATP, replacing enzymes like pyruvate kinase with pyrophosphate kinase. The advantage of this is that pyrophosphate kinase activity is reversible and can be used to synthesize glucose from other substrates. 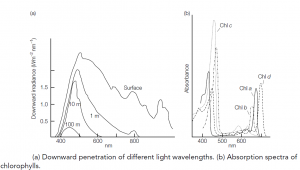 In parasitic kinetoplastids, glycolysis does not occur in the cytoplasm but in its own organelle, the glycosome. Within this organelle, a modified form of glycolysis can give rise to glycerol, which is the substrate of respiration in this group. In anaerobic species, fermentative reactions occur within the hydrogenosome. Substrates like pyruvate and malate from glycolysis are taken up by this organelle and incompletely oxidized to end products like acetate, in the process forming ATP. Hydrogen is another characteristic end product of hydrogenosomal metabolism. In many excavates and chromalveolates, mitochondrial metabolism resembles that of bacterial respiration, having a branched pathway, part of which is sensitive to cyanide (mammalian-like) and part of which has an alternative terminal oxidase that allows the mitochondrion to operate at low oxygen levels. These modifications are most developed in the specialized parasites, where both cellular and mitochondrial structure change as the parasite passes through different stages of the life cycle. 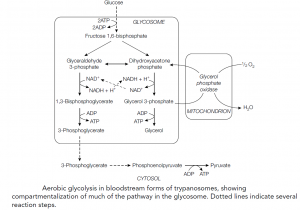 In an aquatic environment temperature influences levels of dissolved oxygen. Oxygen utilization by living organisms increases with a rise in temperature; thus, the availability of oxygen is likely to limit growth in warmer waters. Carbon dioxide, the levels of which in water vary inversely with dissolved oxygen, provides carbon to autotrophic species for photosynthesis. Most chlorophytes and photosynthetic excavates and chromalveolates utilize carbonic acid. Anaerobic photosynthesis occurs in a few species, using hydrogen sulfide or carbon dioxide as terminal acceptors.

The absolute requirement for light in photosynthetic species means that they must have adaptations that allow them to remain in the photic zone of their environment. On land, this is not problematic, but in the aquatic ecosystem there is a natural tendency for cells to sink, and thus there are cell modifications that counter this. Many zoospores and gametes are flagellated and can sense light, swimming towards it. Other species have structural modifications like spines that increase the resistance of the cell to sinking and catch water uplift. Some have gas vacuoles that increase buoyancy. 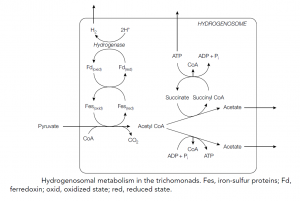 Members of the chlorophytes excavate, and chromalveolates are heterotrophic for nitrogen and must obtain it in a fixed form such as nitrate, ammonia or amino acids. The amino acid requirement is common among the algae (see below). Poor availability of nitrogen is a common limiting factor to growth in the marine environment. Complex nitrogen sources such as peptides and proteins can be utilized after either extracellular or intracellular enzyme secretion has digested the polymers. Amino acids can also be stored as a nitrogen store.

Carbon is rarely limiting for growth of photosynthetic species, but nitrogen and phosphorus often are. Freshwater productivity is often limited by phosphate availability. Silicon is often limiting to diatom growth in nutrient-poor, oligotrophic lakes. Most other nutrients are present to excess in the aquatic environment. Although some photosynthetic species are completely autotrophic, many require an external supply of vitamins, frequently thiamin, biotin, B12, and riboflavin, purines, pyrimidines, and other classes of growth factors. This requirement is termed auxotrophy, and it reflects the abundance of dissolved organic matter to be found in their environment, which allows the selection of populations that do not synthesize all their own metabolic requirements.

Almost all chlorophytes, excavates and chromalveolates are limited to damp environments. A few photosynthetic species that are in lichen symbiosis are protected from desiccation and can survive extremely dry conditions. Most members are tolerant of a wide range of pH; some are specialized and can inhabit highly acidic environments like those of hot sulfur springs. In highly illuminated, oligotrophic lakes, large changes in pH can be caused by variations in dissolved CO2 concentrations and these changes can have detrimental effects on the populations of photosynthetic species. Some dormant stages of chlorophytes excavate, and chromalveolates are capable of withstanding 100°C for several hours. Other species can grow and divide at -2°C in seawater, and specialized ‘snow algae’ have growth optima between 1 and 5°C. Most species have a temperature optimum between 5 and 50°C.

Seawater and fresh water have very different osmolarities. Freshwater species have an internal osmotic pressure of 50–150 mOs ml-1 while freshwater osmolarity is <10mOs ml–1. Those species that do not have a rigid cell wall to prevent excessive water uptake have contractile vacuoles that collect and expel excess water from the cell. Marine organisms have cytoplasm that is roughly isotonic with seawater and therefore usually do not require contractile vacuoles.